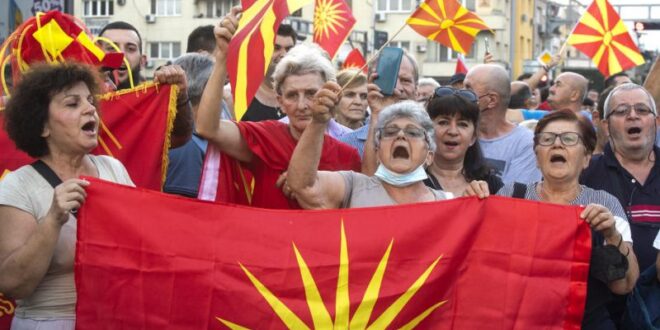 On day three of protests, Skopje finds itself torn between parties and citizens who oppose the French proposal regarding unlocking Bulgaria’s veto, and pressure from Albania and domestic ethnic Albanian parties to accept it.

Following a proposal from the French that some areas of dispute, centred on culture, language, and identity, are integrated into the accession process, Macedonian society has been split on whether this is acceptable or not.

Bulgaria has accepted the proposal and remained tight-lipped since, while Skopje has said a potential compromise has been found, claiming that it addresses their own concerns over ethnic erasure.

However, political lines are very clear. On Monday, the leader of the ethnic Albanian opposition party in North Macedonia, Zijadin Sela, said the French proposal to unlock Bulgaria’s veto over Skopje’s EU accession path is acceptable.

Sela met with Prime Minister Dimitar Kovacevski and said that everything leading the country towards the EU should be supported, adding that Macedonians do not have another alternative.

He also called for the inclusion of the Albanian language in the Constitution as more than 20% of the country speaks it.

Meanwhile, Albanian Prime Minister Edi Rama said it would be a “big mistake” if Skopje did not accept the proposal.

“It is about choices, and now is the time to make a choice. My instinct and humble opinion tell me that it would be a big mistake not to accept them. It would be a big one because the country can be left far behind, and no one will have the will to come back…so don’t do it, just don’t do it,” he said in an interview with Macedonian TV.

Rama underlined that if North Macedonia rejects the French proposal, Albania will seek to proceed separately on the issue of negotiations.

“Albania has now passed the point where it can go alone, and of course, we will ask to go separately if North Macedonia will not accept it. But I am saying they must accept it because there will not be another proposal, it is final, and you do not want to sit in front of that door for another 17 years,” he said.

He continued that the door must be opened so that everything can be discussed.

“Every question will be answered in the dialogue between North Macedonia and Bulgaria, so open this door, open it now,” he said.

Protestors have been taking to the streets since Saturday, accusing Bulgaria of “ethnocide” and comparing Bulgaria’s rhetoric and that of Russian President Vladimir Putin to Ukraine.

“We do not need Europe if we have to be assimilated,” opposition leader Hristijan Mickoski told reporters before the start of the protest. “The answer is no for the latest French proposal.”

“If Europe is not ready to accept us civilised Macedonians where we belong, then we will wait until there are people who will understand that Macedonia and Macedonian identity is above and before all,” he added.

He said it was acceptable and recommended the government add a sentence to the document stating that “from the moment of the opening of negotiation with the EU until their conclusion, if there will be any effort by any party, Bulgarian or any other, to affect the Macedonian language and identity, then Macedonia will withdraw from the talks immediately.”

A concrete outcome is expected in the next few days while Albanian politicians have said the date for the first intergovernmental conference, marking the official opening of accession negotiations, is imminent.

Migrants in Bosnia Risk All on Winning Border ‘Game’