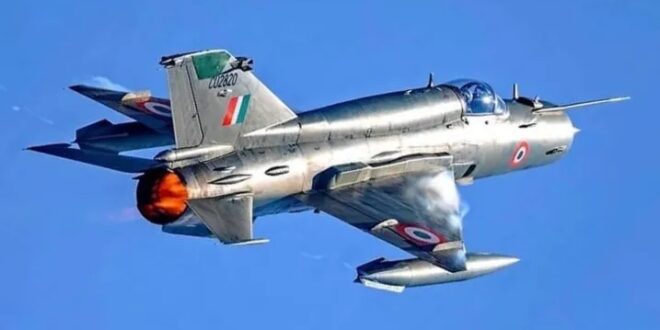 India Will Move Away From Russian Weapons, Grounds All Their MiG-21s Following Fatal Crash

The times of India reports that India has grounded its remaining fleet of Russian-made MiG-21s after another fatal crash that claimed the lives of two pilots on a training mission.

India adopted the MiG-21 in the 1960s from the Soviet Union and has either bought or manufactured under license some 872 of the jets fighters over the years. More than 400 have been lost in mishaps and in brief conflicts with Pakistan. These mishaps have killed some 200 pilots and at least 60 civilians. Citing issues with the aircraft that include corrosion, shoddy maintenance, poor training, and the lack of quality spare parts, India will phase out its remaining four active MiG-21 squadrons in September.

In 2000, India undertook a major modernization program of the aircraft to include new sensors and weapons, but that upgrade is now more than 20 years in the past. While the MiG-21 is relatively inexpensive to produce and maintain compared to modern fighter jets, they are still relics with a design almost 70 years old. In spite of their low cost, India has been unable to fit out more than 32 squadrons of aircraft which is well short of the 42 squadrons the Indian Defence Ministry believes are needed to defend the country from threats posed by Pakistan.

India has worked for decades to develop its own jet fighter known as the HAL Tejas, a single-seat, delta wing fighter for air superiority and light attack roles. This aircraft would be used by both the Indian airforce and their navy.

Since being approved for service in 2011, India has only equipped two squadrons with the Tejas but plans to buy as many as 450 of these aircraft in the coming years. The bulk of the front-line fighters in the Indian air force is comprised of 272, Sukhoi SU-30s. The Indian air force operates seven different types of fighter aircraft including the French Dassault Rafale and Mirage 2000, the UK’s Sepecat Jaguar, MiG-29s, MiG-21s, and the previously mentioned SU-30.

Any air force operating so many different fighters requires different pipelines for training, supplying, and maintaining each aircraft, greatly adding to the expense of keeping them in the air. This is one of the most attractive features of the F-35 Lightening II program for the US military. The three F-35 variants will serve in all branches of the US military with a streamlined system of pilot training, maintenance, and supply for all services.

India is the world’s largest buyer of weapons from Russia, importing some $5.5 billion in arms from Moscow since 2018. The war in Ukraine and sanctions against Russia have disrupted this supply chain India has for Russian arms. No doubt, open contracts for Russian arms are on hold as Moscow diverts small arms, ammunition, air-to-air missiles, and other equipment to supply its own troops in Ukraine. Among the contracts on hold are finished parts for 600,000 Kalashnikov AK-203 assault rifles for a new assembly factory in northern India and the S-400 anti-aircraft missile system.

In response, India is seeking to expand domestic production of arms to 60% in the next three years. The US, the UK, Israel, along with other Eastern European countries have all offered to step into the void and supply India with weapons and equipment they can no longer get from Russia. The military staff in India has also had the chance to observe the combat capabilities of Russian military equipment in action and can’t have come away very impressed with what they have seen. Supposedly state-of-the-art Russian tanks, fighting vehicles, artillery, helicopters, and aircraft are being easily destroyed by US weapons like the Javelin and Stinger missiles which are not state-of-the-art examples of US anti-tank and anti-aircraft missile systems.

There is a considerable opportunity here for the US and Western nations to use arms sales to create a strategic shift with regard to Russia, the world’s second-largest arms exporter. Annual arms export revenue to Russia between 2016 and 2020 was approximately $28 billion in sales to 45 countries. About $14 billion was sales of aircraft of all types, $3.7 Billion in engines, $3.6 billion in missiles, $2.8 billion in armored vehicles, $2 billion in air defense systems, $1.5 billion in ships, and about $300 million in electronic sensors. The US is the largest arms exporter in the world by revenue but not by volume given the much higher cost(and quality) of US-made weaponry and systems. The US reported $45 billion in exported arms sales in 2021, about half of it are exports of aircraft, parts, and engines.

The war in Ukraine had shown pretty decisively that even older US weapons are superior to what the Russians are selling as state-of-the-art. For example, Russia has sold the S-400 air defense system aboard claiming that it could shoot down missiles like the US-made HIMARS missile. Ukraine has shown the ability of HIMARS to hit any target within its range without any apparent interference by the S-400 system.

US arms manufacturers could make quite a business for themselves by selling previous generation weapons to friendly countries that cannot buy our best weapons because of export controls and national security. Strangling Russian and Chinese arms sales would have a significant impact on the economies of both countries while increasing the costs of their own weapons procurements without strong export sales to offset the volume costs.

Post Views: 56
Previous US to deliver more HIMARS ammunition to Ukraine
Next Armenia clings to Turkish peace talks to avert war with Azerbaijan