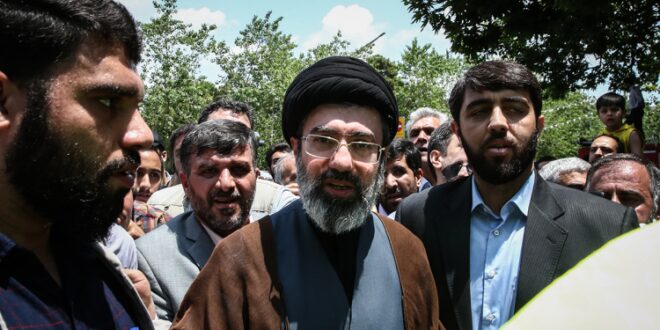 Amid the ongoing circus over efforts to revive the 2015 Iran nuclear deal, two rumors have started to gain traction inside and outside Iran: Supreme Leader Ayatollah Ali Khamenei is on his deathbed and preparations are being made for his son, Mojtaba, to succeed him.

Speculation over Khamenei’s ill health re-emerged last week after the ageing ayatollah unexpectedly cancelled a major meeting with the Assembly of Experts. That same week, the Office of the Supreme Leader (bayt-e rahbari) was also scheduled to broadcast Khamenei’s gathering with a group of athletes, yet images of this annual get-together were never released.

Question surrounding the supreme leader’s health have been circulating for over a decade. In 2014, it was confirmed that Khamenei underwent “successful” surgery for prostate cancer. Since then, rumors about the ayatollah being on his deathbed have surfaced year after year. But like a cat with nine lives, each time Khamenei has emerged “alive and kicking,” as we say in Farsi.

But this time around, these rumors have occurred alongside efforts to more overtly promote Khamenei’s son, Mojtaba, who runs the bayt-e rahbari, as a cleric with “ayatollah” status — a prerequisite for the supreme leadership. This comes only a month after Mir Hossein Mousavi, former presidential candidate and leader of the 2009 “Green Movement” who remains under house arrest, warned that preparations were being made to create a “hereditary” supreme leadership. Many now believe Mojtaba is being groomed to become supreme leader.

The discussion around Mojtaba succeeding his father is not a new one. For some time, he and the Islamic Republic’s incumbent president, Ebrahim Raisi, have been the frontrunners for the mantle. Based on the composition of the Assembly of Experts and given the rise of a new ideological elite at Khamenei’s behest, the possibility of any other candidate — including Hassan Rouhani, former president, or Hassan Khomeini, the grandson of the late founder of the Islamic Republic — is highly unlikely. This tacit tug-of-war between Khamenei’s son and his protégé has shaped the Islamic Republic’s elite dynamics since 2019, when the 83-year-old supreme leader launched a manifesto for the next 40 years. Last year, Raisi’s election as president — a de facto appointment — directly played into this. While some read Raisi’s presidency as a sign that Khamenei is seeking to prepare him for succession, others suggested it was intended to achieve the exact opposite: namely, delegitimize him and clear the way for Mojtaba. This latter camp now claims to have the upper hand.

There is no doubt that Mojtaba wants to be supreme leader. It is only natural that the power-hungry son wants to succeed his father as “God’s representative on Earth” and hold absolute authority over the clerical regime.

But those now forecasting Mojtaba — not Raisi — as the successor are overlooking some major hurdles to his appointment.

The first relates to constitutional requirements. According to the constitution of the Islamic Republic, the Assembly of Experts appoints Khamenei’s successor, and candidates for the supreme leadership are legally required to have “political experience.” Mojtaba fails on this account. Despite de facto running the Office of the Supreme Leader, he has held no formal political roles in the regime. In contrast, Raisi now leads the executive branch and formerly headed the judicial branch of the Islamic Republic. The Office of the Supreme Leader has significant influence over the Assembly of Experts — after all, Khamenei de facto controls this institution, having installed a cohort of absolute loyalists to its membership, especially after 2016. But the influence of the Raisi clan should not be underestimated in the post-Khamenei context. Not only is the incumbent president a member of the Assembly of Experts, but so too is his heavyweight father-in-law, the hardline cleric Ayatollah Ahmad Alamolhoda. If the Assembly of Experts is to appoint the next supreme leader, then Raisi and Alamolhoda may be able to tilt the balance of influence in their favor given that the appointment will, at least in theory, take place after Khamenei’s death.

Of course, theory is one thing, but in practice Khamenei has always considered himself above the law in the Islamic Republic. It is likely that the ayatollah may decide to appoint the next supreme leader before he dies.

But even then, the odds are stacked against Mojtaba.

Turmoil within the regime

Khamenei is fully aware that appointing his son as his successor would catalyze division, chaos, and turmoil within the regime — the exact opposite of the smooth transition he is trying to achieve. The concept of a hereditary supreme leader would also go against Shi’a Islamic convention, with blood lineage for the mantle being exclusively reserved for the 12 divinely ordained Shi’a Imams. This was clear through appointment of Khamenei as supreme leader in 1989, when the Assembly of Experts did not even discuss the idea of selecting Khomeini’s influential son, Ahmad. Today, if Khamenei were to push ahead with this option, after his death it would likely cause uproar across the Shi’a hawzas (seminaries) and among certain factions of the Islamic Republic’s political elite. The last time the regime experienced such internal division in 2009 — after the blatant rigging of the presidential elections — the entire system almost collapsed. In the end, Khamenei was able to overcome the disintegration of the Islamic Republic by relying on the force of the Islamic Revolutionary Guard Corps (IRGC), the clerical regime’s ideological army.

Khamenei’s regime owes its existence to the IRGC. As anti-regime dissent has surged in Iran, the IRGC has demonstrated how far it is prepared to go to preserve the “holy system” by consistently spilling blood on the Iranian streets. This is why Khamenei has given more and more power to the Guard — which he regards as the “main pillar of the Islamic Revolution” (sooton-e kheimeh enghlab). The IRGC’s views will be critical in shaping Khamenei and the Assembly of Experts’ decision to appoint the next supreme leader. Appetite among the Iranian population to overthrow the Islamic Republic has reached unprecedented levels, meaning Khamenei’s successor will need to rely on the power of the IRGC more than ever before to uphold the system. In essence, once Khamenei dies, the IRGC will be the kingmaker.

This begs the question: who does the Guard favor, Mojtaba or Raisi? The IRGC has very good relations with both prospective candidates for the supreme leadership. The deciding factor will be the fault-lines of power rather than friendship. The past 43 years have seen the IRGC transform from an Islamist militia to the single most powerful institution in the regime at the behest of Khamenei. Once he dies, the Guard will want to do everything possible to ensure the next supreme leader does not reduce or challenge its power. To guarantee this and to be able to exert further control, it needs the next supreme leader to be a “useful idiot” rather than a shrewd political operator. This would make Raisi the IRGC’s favorite candidate. If there’s one thing the incumbent president is known for — aside from his reputation as the “butcher of Tehran” — it’s his lack of intellect and political savvy. Raisi’s rise within the regime was never of his own making. From 2016 until now, all of the major political positions he has occupied were either the result of direct appointment or engineered outcomes. People in Iran often joke that Raisi is so stupid, he only completed elementary school. There’s a grain of truth in every joke — and the IRGC is fully aware of this.

So that’s two strikes for Mojtaba — one more and he’s out.

Mojtaba’s third strike is likely to come from his own father’s ambitions for the future of the Islamic Republic. The current supreme leader is seeking to ensure two things after his death.

First, he wants to do everything in his power to ensure his hardline Islamist ideology outlives him. This has been reflected through the structural changes the ayatollah has made since he launched his 40-year manifesto in 2019. Rather than promoting Mojtaba to a public-facing role, Khamenei has put all his energy into “purifying” the regime and installing the most hardline zealots, including Raisi, across its institutions. This is not to say Mojtaba is not a radical extremist — he is. But for Khamenei, securing this vision is far greater than simply his son. Looking back over the past 30 years of his rule, there is no evidence that creating a hereditary supreme leadership is something that Khamenei is interested in. This is rooted in his radical Shi’a Islamist ideology.

Secondly, the supreme leader wants to guarantee the security of his family, not least Mojtaba. Installing his son as supreme leader could put him at risk of assassination by elements from within the system. Khamenei knows this only too well. After all, he and the late Ayatollah Akbar Hashemi Rafsanjani were allegedly the forces behind the killing of Ahmad Khomeini, the son of Ayatollah Ruhollah Khomeini, the founder and first supreme leader of the Islamic Republic. Mojtaba has enough enemies from within the system, and history has a tendency to repeat itself.

The appointment of Raisi as the Islamic Republic’s next supreme leader would address both of Khamenei’s concerns. But it’s not all lose-lose for Mojtaba — quite the opposite in fact.

Installing Raisi, who doesn’t know his left from his right, as a puppet supreme leader would open the path for Mojtaba and the IRGC to call the shots — they would become the puppet masters. There is also the long game. Given that Raisi does not have a son and heir, Mojtaba might hope that this arrangement could ultimately lead to him becoming supreme leader down the line. Mojtaba could view Raisi as an interim supreme leader, a sheep that will follow his orders. Of course, we know power changes people. Raisi the sheep could very well turn out to be a wolf and act accordingly.

Contrary to conventional opinion, in the race between Mojtaba and Raisi, we predict that Raisi will be the frontrunner.

Khamenei is hopeful that through this arrangement he can guarantee the survival of his regime, control elite division, and ensure his hardline Islamist and anti-Western legacy outlives him. But there is one unpredictable force that threatens to undermine this engineered outcome: the Iranian people.

No matter how carefully Khamenei engineers this masterplan, his death will create a sense of uncertainty for the elite and inject a strong dose of hope among the Iranian people that changing the system is possible, and now is the moment. In short, while Khamenei may be able to control his own elites through this grand plan, he simply cannot do the same for the Iranian people. His demise could very well bring the collapse of the entire system.

Post Views: 104
Previous Iran’s hijab protests show the regime is unreformable
Next OPEC+: Neither with the West, nor with the East