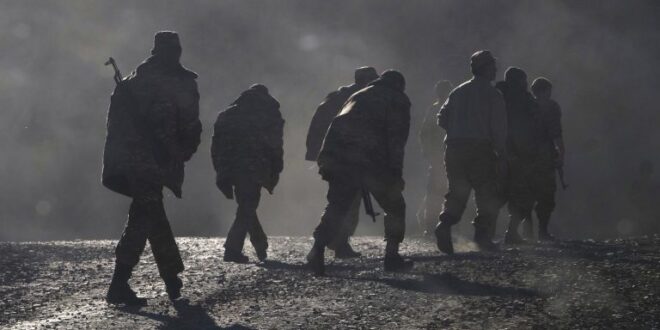 Last week, renewed fighting broke out between Armenia and Azerbaijan in the South Caucasus region, killing more than 200 people.

As the traditional power broker in the region, Russia plays a key role in limiting violence; however, as a treaty ally of Armenia, it is not a neutral party in the dispute.

On September 21, Russian President Vladimir Putin announced that Russia would institute a “partial mobilization” of reservists to address the manpower shortages that have hamstrung Russia’s war effort.

On September 13, renewed fighting broke out between Armenia and Azerbaijan in the South Caucasus region. More than 200 people were killed in the recent violence, which took place over the disputed territory of Nagorno-Karabakh. The two former Soviet republics are old foes and have had unsettled border disputes since the early 20th century. There has been episodic violence between the two for more than thirty years. In the 1990s, following the collapse of the Soviet Union, Armenia made significant territorial gains in a protracted war that devastated the two countries, leaving an estimated 30,000 people dead and 1 million displaced. In the intervening decades, Azerbaijan has used profits from its energy exports to modernize its military. With Turkish backing, Azerbaijan launched an offensive in 2020 that reclaimed much of the territory it lost in 1994. The fighting, which lasted 44 days and left 7,000 dead, ended after Russia helped negotiate a ceasefire between the two in November of 2020.

The Armenian Prime Minister Nikol Pashinyan and the Azerbaijani President Ilham Aliyev accused one another of initiating the most recent bout of fighting, though many analysts suggests that it was Azerbaijan that launched the most recent attack. Using artillery and TB-2 Bayraktar drones purchased from Turkey, Azerbaijan has struck targets inside Armenia’s internationally recognized borders. A ceasefire went into effect after two days of fighting. In an effort to ease tensions and extend the ceasefire, U.S. Secretary of State Antony Blinken hosted talks on the sidelines of the U.N. General Assembly between Armenia and Azerbaijan’s foreign ministers.

Nagorno-Karabakh, the perennial flashpoint between the two states, is a small strip of rugged terrain within Azerbaijan that is populated by ethnic Armenians. It has been locally administered by ethnic Armenians since 1994. After it was recaptured by Azeri forces in 2020, the Armenian population in the region has been under increasing pressure to abandon their homes for refuge within Armenia’s borders. A contingent of 2,000 Russian peacekeepers was deployed as part of the ceasefire agreement to protect Nagorno-Karabakh residents. As the traditional power broker in the region, Russia plays a key role in limiting violence in this area of the Caucasus. It is not, however, a neutral party as it is an Armenian ally under the terms of the Collective Security Treaty Organization and operates an active military base outside of Yerevan. Despite the mutual defense agreement between the two, Russia is currently in no position to come to Armenia’s aid. With its military bogged down in an embarrassing quagmire in Ukraine, Russia’s ability to intervene appears to be significantly degraded.

On September 21, on the heels of fresh military setbacks in Ukraine and an icy reception at the Shanghai Cooperation Organization (SCO) summit, Russian President Vladimir Putin announced that Russia would institute a partial mobilization of reservists to address the manpower shortages that have hamstrung Russia’s war effort. Putin also confirmed that referendums on whether or not to join Russia would be held in four Ukrainian oblasts, before issuing a veiled threat to use weapons of mass destruction to protect Russia’s territorial integrity. This change in policy carries real political risk for President Putin and is a significant escalation that will increase tensions with the West and complicate Ukraine’s fight to liberate Russian occupied territory. Domestically, protests against the mobilization of an estimated 300,000 civilians (preferably with military experience) have threatened the Kremlin’s careful relationship with citizens, staying out of their lives if they stay out of politics. The announcement was also an implicit admission that the “special military operation” has failed and reinforces perceptions of Russian impotence in its “near abroad,” as Putin faces increasing international isolation.

Azerbaijan’s President Aliyev was keenly aware of Russia’s preoccupation in Ukraine, likely seeking to capitalize on the moment by initiating a renewed offensive against Armenia to improve its bargaining position in ongoing EU-mediated peace talks. With Russia distracted and emboldened by its growing influence with European leaders as a substitute for Russian energy exports, Azerbaijan may aim to secure additional concessions from Armenia by highlighting its military overmatch. This recent round of fighting will likely bolster the popularity of President Aliyev’s authoritarian regime, which received a significant boost in support following the military successes of 2020. Having held office since 2003, Aliyev is considered a dictator by some, and his government has been accused of crackdowns on opposition leaders and repression of civil society organizations by Human Rights Watch. Prime Minister Pashinyan has placed less emphasis on the Nagorno-Karabakh dispute than his predecessors, instead favoring domestic reforms and institution building. Although it remains an emotionally charged issue, Pashinyan was re-elected in 2021 despite the military setbacks of the 2020 war. His renewed mandate and focus on domestic issues may indicate potential willingness to offer additional concessions to peacefully resolve the decades-old dispute.