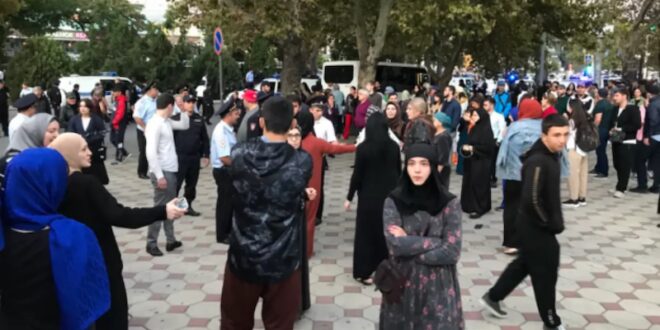 Since Russian President Vladimir Putin announced his partial mobilization program on September 21, officials across Russia have sought to carry out his order. This has sparked protests in more than 50 cities and fire bombings of official buildings in more than 20. Outside the two capitals (Moscow and St. Petersburg), the largest protests have been in non-Russian areas and in ethnic Russian rural areas far from the Kremlin, the two areas where the Russian authorities had erroneously calculated they would find it easiest to meet mobilization quotas. In response, the authorities have cracked down, arresting more than 2,300 demonstrators thus far. The largest flashpoints have been in Buryatia and Sakha in the Far East, as well as across the non-Russian republics and Russian krais and oblasts of the North Caucasus (Rfi.fr, September 25; Novayagazeta.eu, September 26).

But, overall, far and away the largest and most uninterrupted demonstrations outside Moscow and St. Petersburg—and the site of the largest number of arrests outside the capitals—have been those in Dagestan. Activists there say that Putin’s mobilization order has destroyed popular myths about and support for the Kremlin leader and that they and the thousands of residents of the Muslim republic are showing the rest of Russia how to resist Moscow’s orders and how such resistance can be effective (Kavkaz.Realii, September 26; Rfi.fr, September 26; Novayagazeta.eu, September 27).

Immediately after Putin issued his order, Dagestanis in villages and cities across the 3-million-strong Muslim republic took to the streets to denounce the partial mobilization and demand that the Kremlin reverse its decree. As the protests continued—and Daghestanis are currently still demonstrating—some Russian officials have tried to calm things by saying they will work to ensure that any problems with the mobilization will be corrected; but Russian special forces, including troops dressed in civilian clothes, have moved in, firing live ammunition over the protesters’ heads, engaging in fights with them and arresting more than 100.

But so far, they have failed to intimidate the population. Instead, these actions appear only to have outraged the crowds further. Demonstrations against mobilization continue, with some Daghestanis now blocking major roads to prevent the Russian authorities from moving law enforcement around (Meduza, September 25; Ehorussia.com, September 25; Rfi.ru, September 26).

Moscow has good reason to be alarmed by this course of events for two primary reasons. On the one hand, it had expected to harvest a large number of mobilized veterans from a republic where poverty has forced many men to serve in the military, men who the Kremlin might expect would be less opposed to serving again than those in other places where economic conditions have been better. And on the other, in Dagestan, perhaps even more so than elsewhere, opposition to the mobilization decree is deeply intertwined with opposition to Putin’s war in Ukraine and his regime’s policies more generally, thus creating a potentially explosive cocktail of resistance that will likely spread if it is not suppressed quickly. That sets the stage for a possibly brutal Muscovite intervention in the coming days. In truth, the situation may have already reached the point in which using force will prove to be like throwing water on a grease fire—it is more likely to spread the conflagration than to extinguish it.

Why is this happening in Dagestan? The overarching explanation certainly lies in the economy. Dagestanis are poor and, under Putin’s recent policies, becoming poorer. As such, they see little reason to expect that Moscow will do anything to help them. Indeed, Putin’s policies, such as healthcare optimization, have hurt them deeply (Kavkaz.Realii, September 26). However, a critical demographic and cultural reason may matter even more. More than any other non-Russian republic, Dagestan is a complicated mosaic of smaller nations, each of which has its own distinctive proud traditions. Furthermore, each nation within Dagestan, not surprisingly, takes note of what is happening to its children, as they form a relatively large share of each ethnic group and thus remain a far tighter community than is typically the case with larger nations.

Therefore, it is no accident that the first protests began not in ethnically diverse Makhachkala but in smaller cities dominated by the Kumyks, the largest Turkic nationality in the North Caucasus with just over half a million in Dagestan and the neighboring republics to the west. From Moscow’s perspective, their involvement matters in two ways. On the one hand, it helps explain why the Kumyks fear that, if their young men die in Ukraine, then that will weaken their standing within Dagestan and only encourage other ethnic groups there to poach their lands. And on the other, it represents something more ominous. If the Kumyks in Dagestan are protesting against mobilization, Putin’s war in Ukraine and Moscow’s policies more generally, it is highly likely that the Kumyks outside this republic will follow suit—a development that could lead to a social explosion across the North Caucasus and confront the Russian authorities with a problem far greater than their current ability to deal with, given the way in which Russian forces are still tied down in Ukraine (Idel.Realities, September 29).

Because Dagestan is far from Moscow with its Western embassies and journalists, it has not attracted the attention in the West that it deserves, as was the case with the growing national movements at the end of Soviet times; even so, one country—Ukraine— has been extremely attentive and for good reason. This past week, Ukrainian President Volodymyr Zelenskyy spoke directly about Dagestan. “We see that people, in particular, in Dagestan,” he said, “are beginning to struggle for their lives. We see that they are beginning to understand that this is a question of their life. Why should their husbands, brothers and sons die in this war? … Fight to prevent the dispatch of your children to death and of all those who may fall victim to this criminal Russian mobilization” (Facebook.com, September 25).

Some Ukrainian commentators are now going even further, referring to the events of the past week as “Dagestan’s Maidan,” a reference to events in Ukraine during 2014 that set the stage for the country’s increasingly independent and pro-Western course (Apostrophe, September 26). Putin must be worried that he now faces not only the results of the Maidan in Ukraine but also the potential for similar ones within the current borders of the Russian Federation.