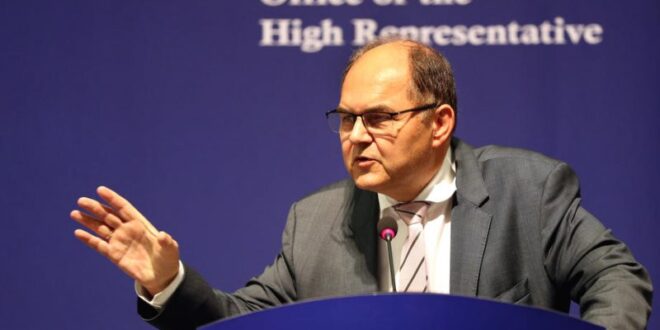 Bosnia’s international peace overseer imposed changes to the election law aimed to prevent blockades of a regional government after polls closed in presidential and parliamentary vote on Sunday.

Former German politician Christian Schmidt, who has vast powers as international High Representative in Bosnia, acted to enable a more effective work of the government and parliament of the country’s autonomous Bosniak-Croat Federation.

“It is crucial for destiny of this country that there will be no blockades,” Schmidt said addressing public in a Youtube message.

Meanwhile, Moderate Bosniak candidate Denis Becirevic is leading in the run-up for the seat on Bosnia’s tripartite inter-ethnic presidency, preliminary results based on a partial vote count showed on Monday.

Becirevic, the Social Democratic Party (SDP) member who was backed by 11 opposition civic-oriented parties, won 55.78% of the votes over Bakir Izetbegovic, whose nationalist Bosniak (Bosnian Muslim) Party of the Democratic Action (SDA) party has been in power since the end of the war in 1996.

Izetbegovic, who according to the election commission won 39.31% of the votes, conceded defeat late on Sunday.

Bosnia is going through its worst political crisis since the end of its war in the 1990s, prompted by the separatist policies of the Serb leadership and threats of blockades by Bosnian Croats.