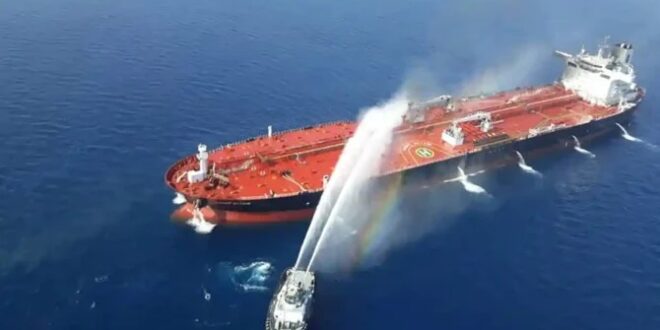 The internationally recognized government of Yemen has slammed Houthi threats to attack oil ships and called for international action to stop the group from damaging civilian infrastructure and power sources.

“Such a threat is unmistakable evidence of these groups’ terrorist nature, which is nothing new to Yemenis. It is crucial that the world understands how this terrorist organization operates and how it disregards fundamental international laws and conventions,” he told Arab News on Tuesday.

The minister’s comments came as the Aden-based Ministry of Transportation urged foreign shipping companies to continue their operations despite Houthi demands that they stop movements of the country’s oil.

In a letter sent on Monday to agents of shipping firms operating in Yemen, the ministry’s Maritime Affairs Authority said they should carry on exporting the nation’s oil, gas, and minerals from government-controlled ports and not comply with Houthi demands or threats.

“Memoranda or circulars will not be considered unless they are issued by Aden’s Presidency of the General Authority for Maritime Affairs,” the government’s maritime body said in the letter seen by Arab News.

The Yemen government’s request came a day after the Houthis officially ordered ship operators to stop transporting oil and minerals from government-controlled regions, threatening to target their vessels if the demand was ignored.

On Sunday, hours before a UN-brokered truce expired, the Houthis’ Minister of Transport Abdul-Wahab Yahya Al-Durra sent a letter requesting firms to cease shipping the country’s oil and other natural resources by 6 p.m., accusing them of looting Yemen’s resources.

“Any navigation activity that violates standard procedures will be treated as an illegal act that jeopardizes national interests, and we hold you fully responsible for violating it,” the Houthi minister said in his letter, also seen by Arab News.

The Yemeni militia group has refused to renew the UN truce and has resumed aggressive military operations in Marib, Taiz, and Dhale.

The Houthis threatened to target oil ships docking in government-controlled areas in a bid to deprive the government of financial resources unless it paid all public employees in areas under the group’s control, reopened Sanaa airport, and lifted alleged restrictions on fuel ship movements through Hodeidah port.

The Houthis’ refusal to open roads in Taiz has also hampered efforts to keep the truce in place.

The Yemeni government has said that the Houthis should pay public employees in their areas with the millions of dollars earned from fuel ships passing through Hodeidah port during the truce.

Yemen’s Oil Minister Saeed Al-Shumasi recently told Al-Ghad Mushreq TV that the country exported 2 million barrels of oil every two months from oil fields in the southeastern province of Hadramout, plus 600,000 barrels from the southern province of Shabwa.

The Dhaba oil terminal in Hadramout province handles most of the country’s oil exports to international markets.

Post Views: 80
Previous Syrian government gears up for major military operation against IS in the desert
Next Why The Russian Population Supported Authoritarian Power – OpEd