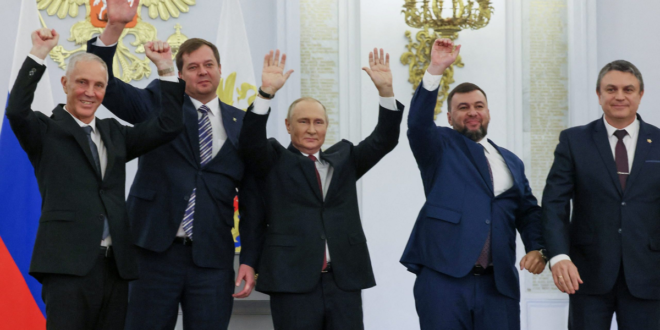 Russian President Vladimir Putin has signed treaties to begin the formal (and illegal) annexation of occupied parts of Ukraine’s Donetsk, Luhansk, Kherson, and Zaporizhzhia regions—an area nearly the same size as Hungary. The move comes just days after staged “referendums” held at gunpoint in which the Kremlin claimed a significant majority of voters chose to join Russia. How will the world respond to Putin attempting to forcibly redraw Europe’s borders for the second time in eight years? Our experts map out what to expect next.

By annexing Russian-occupied territory and suggesting that any Ukrainian attempts to retake this stolen land could spur Russia to retaliate with weapons of mass destruction, Putin is “daring Ukrainian President Volodymyr Zelenskyy to continue the war in the face of a not-so-veiled nuclear threat,” Melinda tells us.
It’s a sign, Peter argues, of “the Russian ruler’s desperation to regain the initiative” following a successful Ukrainian counteroffensive in the northeastern Kharkiv region. “Vladimir Putin may well be the first leader in history to attempt annexations while his army is retreating.”

“Like a gambler on a losing streak, Putin is now raising the stakes,” Peter adds.

…or more modest aims?
But John notes that Putin’s gambit might be more measured. “Perhaps the threats are designed to make sure that the United States does not supply the more advanced weapons that Ukraine has persistently requested to conduct a strong, successful counteroffensive this fall.”

The Kremlin, John believes, can live with tough talk from Western governments that matches Putin’s rhetoric. But in the short term, it wants the West to hold back from sending Ukraine heavy weaponry such as tanks, fighter jets, and longer-range artillery systems that could bolster Ukrainian counteroffensives. (The United States has just announced that it will send eighteen more High Mobility Artillery Rocket System launchers to Ukraine, but these won’t arrive for years.) This would constitute “a tactical win” for Putin by giving him “breathing room to fight another day.”

At home, meanwhile, Putin “still controls the security services” and remains “firmly in charge,” Melinda says. “While more than 200,000 Russian men have fled” the country to avoid being conscripted into the military as part of a new mobilization, “they leave behind a Russian population that has few opportunities to protest and resist the war” and there has not yet been “a groundswell of protest activity.” She adds that the Russian leader is still feeling out what’s possible: “Putin doesn’t know what he can get away with, but don’t write his political obituary yet.”

No compromise
Peter advises Western leaders to stand firm, strengthen sanctions against Russia, increase military support for Ukraine, and “dampen any lingering Kremlin expectations of a coming compromise by publicly confirming the West’s collective commitment to a Ukrainian victory.”

Melinda adds that Ukraine’s partners should be encouraging other nuclear-weapons powers, particularly China and India, “to publicly and privately tell Russia to stand down and stop making irresponsible threats,” and that the White House should keep up its aggressive warnings against a Russian nuclear strike.

But will that be enough? “No one knows,” Melinda says. After all, she points out, the Russian leader ignored US warnings in the lead-up to his February 24 invasion. “Putin shows no sign of backing down.”

Post Views: 76
Previous How the US can focus its fight against foreign influence operations
Next Iraq’s commitment to OPEC oil reduction won’t affect exports