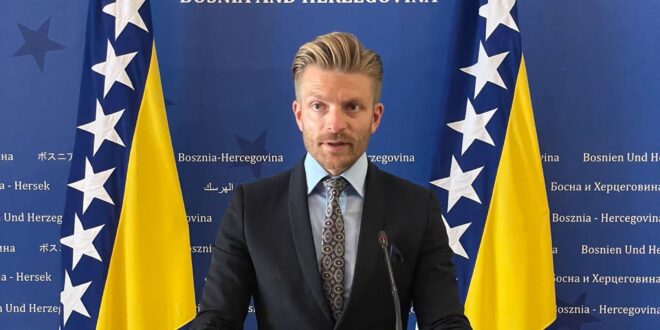 Pervan: In 1993, the UN labeled ethnic cleansing in BiH as a form of genocide

The promotion of Alden Pervan’s book Dayton Agreement: Short-term redemption or long-term tragedy was organized by the Bosnian Academy of Sciences and Arts “Kulin ban”.

The moderator was dr. Muhamed Šemoski, who at the very beginning of the promotion referred to the book, and especially to the biography of Master of Science in International and European Law, Alden Pervan, who defended his scientific work at the Faculty of Law in the Netherlands, and at the persuasion of Academician Kurtćehajić, due to the importance of the topic, turned the scientific work into a book in Bosnian and the English language.

President of the Bosnian Academy of Sciences and Arts, Academician Prof. Dr. Speaking about the book by young Alden Pervan, Suad Kurtćehajić pointed out that the author made a significant contribution to science, and that he entered the rather unexplored scientific field of applying the IUS COGENS norm as the strongest norm of international law, which in the first place prohibits genocide and according to Article 53 of the Vienna Convention on the law of international treaties since 1969 renders any such treaty null and void.

To the question that has been asked for years, how can we live according to the Dayton Agreement if it was already established by the judgment of the highest court on the planet, the International Court of Justice in The Hague, dated February 26, 2007, that the army is Rs (in Article 297) and in some places and police RS committed genocide in Srebrenica Alden Pervan gave the answer in the book.

Namely, in order to prevent abuse of the IUS COGENS norm, its verification before international arbitration or the International Court of Justice in The Hague is necessary. Given the fact that the Dayton Agreement established such a political system in which we have a three-member Presidency of BiH with the right to veto each member of the Presidency of BiH, this verification, which is a simple procedural matter for any normal country, is practically impossible for Bosnia and Herzegovina.

The only thing that remains is what academician Kurtćehajić emphasized, and what he has been pointing out for years, is going through the UN General Assembly (which can be initiated by any UN member state) to the International Court of Justice in The Hague with obtaining an Advisory Opinion on the question “Is the existence of the entity Republika Srpska contrary to international law after the verdict for the genocide in Srebrenica passed by the same court and numerous verdicts of the Criminal Tribunal for the former Yugoslavia against almost the entire military and political top of RS for terrible crimes against humanity, including several of them for the genocide in Srebrenica and the partial verdict against Slobodan Milošević for genocide in seven BiH cities”.

Academician Kurtćehajić pointed out that Alden Pervan’s research given in this book confirms that such a path is the only possible one for now, and at the same time thanked him that in his activity he got his successor on the way to establishing law and justice and that everything that arose on genocide must be uninstalled.

Although the advisory opinion does not have the force of a verdict, it is almost certain that it would have the effect that the UN and the entire civilized world must face the fact that on the territory of Bosnia and Herzegovina there is a creation that exists contrary to international law and that its installation rewarded genocide as well as other terrible crimes.

Academician Kurtćehajić concludes that this position of the international community would sooner or later lead to the convening of a new International Conference for Bosnia and Herzegovina, which would, on a new basis, using the constitutional and legal solutions of the European democratic tradition, organize Bosnia and Herzegovina as a normal and functional state in which the rights of all its citizens achieved in an equal way.

dr. Speaking about the book by young Alden Pervan, Esad Bajtal pointed out that it is high time to finally do something in Bosnia and Herzegovina. One cannot actively and by all means obstruct Dayton, and at the same time, in front of the public, advocate its untouchability. It must be chosen.

How else to explain the following moral-logical paradox: The arrival of the Dayton Peace Agreement, the leading political structure of the RS at that time was met with a knife. In SDS’s metaphorical metanarrative, the Dayton Agreement was, immediately after its signing, synchronized in the media and “with all the bells”, proclaimed as “the grave of the Serbian people”.

Under the auspices of such a point of view, the open enforcement of the non-implementation of Dayton was legalized and organized. For almost two decades, the entire daily political scene in Bosnia and Herzegovina has been framed by it. From the fact that the RS is a state, to the rejection of all other obligations accepted by Dayton, and the undisguised obstruction of the institutions of Bosnia and Herzegovina.

Over time, under the pressure of the international community to finally put an end to the undisguised rejection of Dayton, and increasingly loud internal demands for its revision, the rejection of the Agreement by the authorities in the entity of the RS, tactically, is replaced by its declaratively emphasized acceptance with, planned and continuous, the continuation of its practical obstruction. It has come to the point that Dayton, from its loudest and most consistent Deniers, is declared a Holy Word, which “must be strictly respected”, otherwise, as the threatening ones say, a wave of “earthquakes in the region” and “a new chain of radicalism” will follow, which, translated in the language of realpolitik, which started the previous one, means – a new war.

Therefore, the realpolitik coded message reads as follows: without our consent, you cannot, more precisely: (under the threat of war) you must not change Dayton. At the same time, without your or anyone else’s consent, we can, and want, and are allowed to – not implement it. Even shorter: others are forbidden exactly what is allowed to themselves. In this way, threats and blackmail, as a consequence of the incomprehensible tolerance of the International Community, become the calculated basis of the status quo and the existentially barren stalemate of BiH, which cannot be overcome without a change in Dayton or without a new international conference.

And both of which Dr. ended his presentation with. Baital is rejected by those who, publicly swearing by it – practically (inaction) – reject Dayton.

In the end, its author Alden Pervan spoke about his book, in his research came to the conclusion that the Dayton Peace Agreement is null and void due to the fact that it legalized a de facto regime in the form of a de jure entity that had a high degree of effective control and power over the territory it controlled and in this connection has full responsibility to protect the human rights of all citizens present in that territory. However, that same de facto regime carried out a campaign of ethnic cleansing, which was qualified as genocide through various UN resolutions (47/121 of April 7, 1993), and in addition, many other terrible crimes were committed that individually fall under the IUS COGENS norm, the highest norm in international law.

All of this makes the Dayton Peace Agreement based on Article 53 of the Vienna Convention a null and immoral agreement because it legalized a creation that carries such a mortgage.

In the end, taking into account that, on the one hand, within the Vienna Convention, nullity is not automatic, and on the other hand, because of the three-member Presidency, BiH cannot initiate nullity at the moment, he confirmed the point of view of academician Kurtćehajić that this case remains to be presented to the International Court of Justice, which would in the form advisory opinion have answered the question of whether a de facto regime that was legalized into a de jure entity and in the context of its establishment committed so many crimes that simultaneously fall under the IUS COGENS norm based on international law, has the right to exist.

Post Views: 92
Previous The Impact of the Ukraine War Will Last for a Generation
Next Emir Ramic: Letter to the Canadian Prime Minister