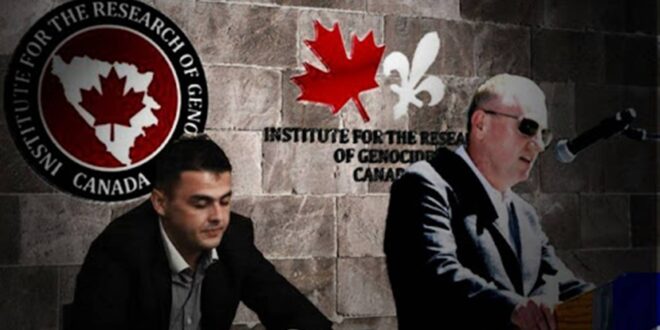 Srebrenica genocide denial constitutes the incitement of hate, and hate has no place in Canada. We’re deeply concerned by the scheduled screening of Boris Malagurski’s film, “Republika Srpska: Struggle for Freedom.” The film willfully incites hate by denying the 1995 Srebrenica genocide and, as such, is in contravention of Canadian criminal code Section 319(1) and Section 319(2). Activities glorifying genocide and war criminals are also in contravention of Section 318 of the Canadian criminal code. Freedom of speech in Canada is not absolute and has its limitations.

Mr. Malagurski is a former Russia Today host. The Serbian-Canadian film producer has not publicly expressed his intent to extend the film’s tour beyond Europe. We seek reassurance from you that all measures will be taken to discourage his denialism from being disseminated in Canada.

There are two bases on which we believe condemnation of this film by Canadian representatives is needed.

Firstly, the film’s trailer, which has been released in the public domain, glorifies the founding of the Republika Srpska (RS) entity in the 1992-1995 Bosnian War as a fight against “slavery” and a “struggle for freedom”. This is a continuation of the director’s years of public relativization and denial of the crimes committed in the RS’ name, including the 1995 Srebrenica genocide, which the International Criminal Tribunal for the former Yugoslavia (ICTY) found was committed by the Republika Srpska’s VRS army, at the behest of Radovan Karadžić and General Ratko Mladić.

Secondly, Canada has a long-standing special relationship with the people of Bosnia and Herzegovina. This is evidenced by the significant and active Bosniak diaspora in Canada, who continue to contribute to Canadian culture, as well as the ongoing diplomatic cooperation between our two nations. Through the difficulties of post-war peace-building, Bosniaks have been able to rely on Canada to honor the victims of the war and to defend truth over revisionism. If Mr. Malagurski were to be given the impression that his film is welcome in Canada, we believe this would be contrary to the bedrock of the Canadian-Bosnian relationship that Canadian Bosniaks have come to cherish.

Lest we forget that the Bosnian War saw over 100,000 Bosnians murdered. In the territory claimed by the ‘Republika Srpska’ authorities, concentration camps such as Manjača, Omarska, and Trnopolje were established by Serb forces, in which thousands of non-Serb civilians were detained, tortured, and killed. The culmination of this genocidal campaign was the mass killings in the Srebrenica genocide of July 1995. Boris Malagurski’s film revises this painful history of 1992-1995 through its miss-framing of genocidal crimes as a “struggle for freedom”. In doing so, the film whitewashes crimes against humanity that were found to have been committed by the ICTY, including the Srebrenica genocide. Seeing that Canada has recently taken a step to recognize the genocide of Indigenous Canadians, and has shown support to Ukrainian Canadians through their struggle, the Bosnian Community throughout Canada needs the same support by publicly condemning this film. Allowing this film to be broadcasted and displayed in Canada, would be completely unbecoming of what true Canadian values are.

The Institute for Research of Genocide Canada and the Bosnian Canadian Community, therefore ask for all possible measures to be used to condemn the film, Republika Srpska: The Struggle for Freedom in Canada.

No amount of denial will change the facts. Srebrenica was and remains a genocide. The Srebrenica genocide is the first legally established case of genocide in Europe; first by the International Criminal Tribunal for the former Yugoslavia (ICTY), and then by the International Court of Justice (ICJ). It is considered the largest mass murder in Europe since World War II.

The presiding UN judge in the Srebrenica case was a Jewish Holocaust survivor, the Honorable Israeli-American judge Theodor Meron. In 2004, he delivered a historic speech at the Srebrenica Genocide Memorial in Potocari. In his address, he stated the following,

“The gravity of genocide is reflected in the stringent requirements which must be satisfied before this conviction is imposed. These requirements – the demanding proof of specific intent and the showing that the group was targeted for destruction in its entirety or in substantial part – guard against a danger that convictions for this crime will be imposed lightly. Where these requirements are satisfied, however, the law must not shy away from referring to the crime committed by its proper name. By seeking to eliminate a part of the Bosnian Muslims, the Bosnian Serb forces committed genocide. They targeted the extinction of the forty thousand Bosnian Muslims living in Srebrenica, a group that was emblematic of the Bosnian Muslims in general. They stripped all the male Muslim prisoners, military and civilian, elderly and young, of their personal belongings and identification, and deliberately and methodically killed them solely on the basis of their identity. The Bosnian Serb forces were aware, when they embarked on this genocidal venture, that the harm they caused would continue to plague the Bosnian Muslims. The Appeals Chamber states unequivocally that the law condemns, in appropriate terms, the deep and lasting injury inflicted, and calls the massacre at Srebrenica by its proper name: genocide. Those responsible will bear this stigma, and it will serve as a warning to those who may in future contemplate the commission of such a heinous act.”

When the Serb forces entered the besieged Srebrenica in July 1995, more than 8,000 unarmed and starving Bosniaks were lined up, summarily executed, and thrown into mass graves. According to the research published by Danijel Toljaga and Hasan Nuhanović at least 499 children were executed. In September 2007, the exhumations of mass graves in Zeleni Jadar indicated that children aged 7 to 11 were shot in the head.

It should be noted that in the first three months of the war in 1992 alone, Serb forces destroyed 296 Bosniak villages around Srebrenica and killed 3,166 Bosniaks. According to Mr. Toljaga” It was these massacres that should have alerted the international community to the prospect of genocide when the United Nations-protected enclave eventually fell to Bosnian Serb forces commanded by General Ratko Mladic three years later, in July 1995.”

Chairman of the Institute for Research of Genocide Canada

Post Views: 102
Previous Pervan: In 1993, the UN labeled ethnic cleansing in BiH as a form of genocide
Next Bosnia’s betrayal: Schmidt compared himself with Austro-Hungarian Emperor Franz Joseph