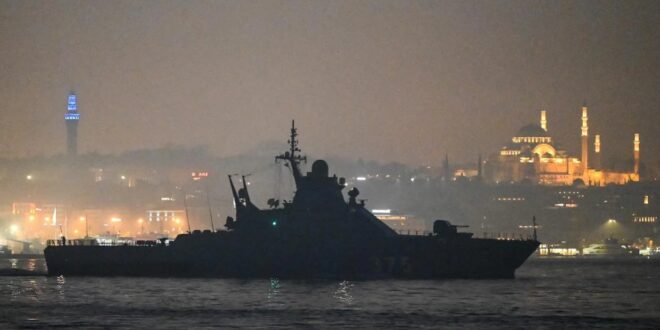 Two Russian Navy ships have finally left the Mediterranean after sitting idle for nine months due to Turkey’s ban on the transfer of warships to the Black Sea amid the Ukraine war, one regional source with information told Middle East Eye.

The Ukraine-based Black Sea Institute of Strategic Studies reported on Sunday that the Russian missile cruiser Varyag, the flagship of the Russian Pacific Fleet, and Admiral Tributs, a large anti-submarine ship, left the Mediterranean Sea on 21 October through the Suez Canal.

Both ships had originally arrived in the Mediterranean Sea on 2 February, a couple of weeks short of Russia’s invasion of Ukraine.

On Monday, the Russian defence ministry confirmed in an official statement that the detachment, consisting of Varyag and Admiral Tributs, passed the Strait of Malacca and entered the South China Sea, “making an inter-fleet transition from the Mediterranean Sea to a permanent deployment point in Vladivostok”.

Turkish officials declined to comment. However, a source familiar with the issue told MEE that Russia had not made any request for passage through the straits for its navy ships since early March, when Turkey asked Black Sea countries to not move ships through the Dardanelles and the Bosphorus, invoking its right under the 1936 Montreux Convention, which empowers Ankara during wartime to close its straits.

Turkey has been walking a fine line on the Ukraine invasion since February, arming Kyiv with combat drones and ammunition but cutting economic deals with Moscow. Turkey is seeking a 25 percent discount on Russian gas purchases and a payment postponement until 2024.

In March, at least four Russian ships – two destroyers, a frigate, and an intelligence vessel – were turned away after Ankara denied them access.

Two people familiar with the talks said Ukraine had promised to use the grain corridor solely for civilian and humanitarian purposes, and not for launching attacks on Russian assets.

“They also said they will avoid actions that could threaten the safety of the corridor,” one person familiar with the negotiations said.

The resolution to the crisis came after intense diplomatic engagement by the Turkish president, defence minister and foreign minister.

The grain deal allows Ukrainian agricultural products to be shipped from Odesa under UN supervision, whereby every inbound and outbound cargo ship is inspected alongside Russian, Ukrainian and Turkish delegations to satisfy all parties.

The deal is set to expire on 18 November, but UN and Turkish officials are hopeful that it will be extended.

Two people familiar with the talks told MEE that Russia has been frustrated by the fact that UN and western powers couldn’t deliver on the second part of the deal, namely to facilitate the export of Russian agricultural products and fertilisers through the Black Sea.

Moscow says western powers need to find a way to provide insurance for the ships carrying Russian products and a method to allow payment.

Russian President Vladimir Putin has also complained about the fact that the majority of the grain is going to developed countries rather than to nations with food crises.

Turkish and Ukrainian officials say the exports are reducing global food prices and giving a lifeline to countries that cannot obtain agricultural products. Hulusi Akar, the Turkish defence minister, said more than 10 million tonnes of grain had already been shipped under the deal.