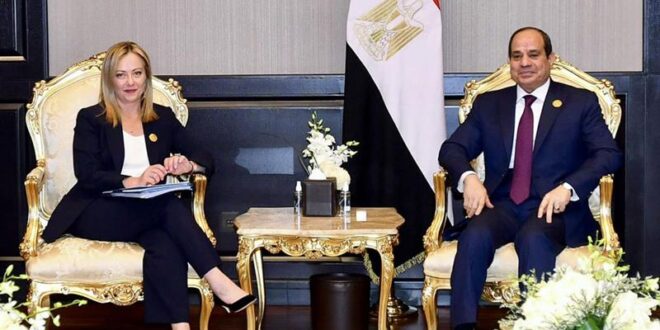 President Abdel-Fattah El-Sisi discussed on Monday with Italian Prime Minister Giorgia Meloni ways of fostering relations between the two countries in various fields, including investment, trade and economy, as well as promoting cooperation in the fields of security and industry.

El-Sisi welcomed Meloni’s visit to Egypt and her participation in COP27. He said he hoped that her visit give strong impetus to bilateral ties in the political, economic, cultural, and security fields.

The two leaders discussed the possibility of electricity interconnection between the two countries, which would enable Egypt to employ its capabilities to help European countries deal with their energy crisis, the spokesman added.

The meeting also discussed security in the Mediterranean, particularly the situation in Libya. Both sides asserted the importance of maintaining Libya’s sovereignty and supporting its efforts to hold presidential and parliamentary elections.

Furthermore, both leaders discussed cooperation between the two countries to reach a just conclusion to the case of Italian student Giulio Regeni., according to Rady.

The Italian premier asserted Italy’s keenness on promoting cooperation with Egypt in ways that serve the interests of both countries and peoples. She described Egypt as a strong pillar of security and stability in the Middle East and the Mediterranean Basin.

During the meeting, the Egyptian president stressed that Egypt is ready and willing to cooperate with Italian bodies concerned with combating irregular migration. He said that Egypt’s efforts in that respect reflect its commitment to eliminate this phenomenon, said the spokesman.

The two leaders exchanged views on coordinating efforts between Italy and Egypt. They stressed Egypt’s importance as a leading partner of the European Union in the fight against irregular migration.

Meloni, on her side, praised Egypt’s efforts in combating irregular migration. She emphasised that Egypt has succeeded since 2016 in preventing the boats that bear irregular migrants from using Egyptian coasts as a base for their operations, according to Rady.