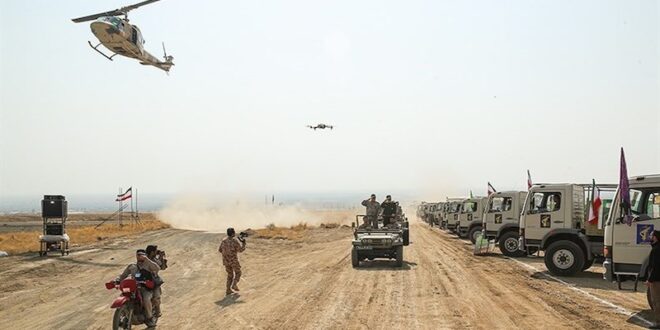 Following Azerbaijan’s victory over Armenia in the Second Karabakh War in late 2020, Iran has doubled down on its long-standing diplomatic provocations, economic warfare, and threats of military aggression against Azerbaijan. The qualitative increase in its support for Armenia against Azerbaijan manifests in each of these areas.

On the diplomatic front, in October, Iran opened a consulate in Kapan, the capital of Armenia’s Syunik province, where the Zangezur corridor should be built (and coincidentally only a few miles from the border with Azerbaijan). Armenia committed to construct the Zangezur corridor, between the body of Azerbaijan and its exclave Nakhchivan, in the November 2020 trilateral statement with Azerbaijan and Russia, that put an end to the Second Karabakh War. Iran and Armenia pretend that the corridor would be extraterritorial and an infringement on state sovereignty; however, the Lachin corridor inside Azerbaijan, with which it is frequently compared by analogy, is neither of those. Nor does it matter that Russian border guards would provide security, because they provide security for nearly all of Armenia’s borders with Azerbaijan as it is.

On the economic front, Iran’s Islamic Revolutionary Guard Corps (IRGC) has been intensifying its military-industrial cooperation with Armenian economic leaders in technological and surveillance fields. Executives of Iranian military companies have been visiting Armenia since the beginning of the year. When an Iranian Export and Investment Centre was established in Yerevan earlier this year, Iranian laser- and communications-system and drone manufacturers were well-represented. The deputy governor of the Syunik region has met with the Chinese ambassador to Yerevan, welcoming Chinese foreign direct investment in the region, not excluding the military-industrial sector.

On the military front, even in late 2020 during the Second Karabakh War, Iranian forces actually entered occupied Azerbaijani territory near the historic Khudafarin bridge. This aided Yerevan’s aggression against Baku by blocking the latter’s road to Zengilan. In September 2021, Iran held extraordinary war games near its border with Azerbaijan. Again, in October of this year, Iran conducted large military exercises on its border with Azerbaijan, including practising crossing the Aras River, which defines a large part of the border between the two states. On November 2, the Ministry of Defence in Baku reported that still more, unannounced military drills had begun near the border.

Armenia has long been an ally of Iran. Since the outcome of the Second Karabakh War has changed the geopolitical and geoeconomic dynamics throughout the broader region, that alliance has now acquired regional—indeed “macro-regional”—significance. This result emerges from the fact that Russia has moved more directly toward overt military and strategic co-operation with Iran. It has done so, because it has been compelled, in order to support its war of aggression against Ukraine, to redeploy its forces away from Syria and the South Caucasus.

In Syria, Russia had implicitly given Israel some freedom to act against Iranian and Iranian-backed forces, so long as Israel did not contest Russian interests elsewhere. Now, however, due to the redeployment of Russian forces, Israel is still freer to act in this regard, including in Lebanon. Because Iran’s capacity to act against Israel in Lebanon is limited, it has increased its activities against the latter’s close economic and military partner Azerbaijan.

In fact the deepening of Azerbaijan’s ties with Israel began a decade ago, indeed as a response to even then constantly growing Iranian threats. As long ago as 2013, members of the Iranian legislature drafted a bill calling for the 1828 Treaty of Turkmanchay to be revised. This is the treaty that divided the multiple Azerbaijani khanates between the Russian and Persian Empires. In particular, it confirmed the cession of the northern khanates to Russia, splitting historical Azerbaijan in two.

It was as a result of that initiative by Iranian parliamentarians, seeking revision of the Treaty of Turkmenchay, that Azerbaijan’s erstwhile foreign minister Elmar Mammadyarov paid the first-ever high-profile visit by any of Baku’s cabinet ministers to Israel, in late April 2013. However, Azerbaijan has generally refrained from high-level visits to Israel in the past, in order not to antagonize Iran. Only a few weeks ago, then, did official Baku state its formal intention to open an embassy in Israel, which has had its own embassy in Baku for some time.

The Israeli Ambassador to the Republic of Azerbaijan is the remarkable George Deek, the first Israeli Arab Christian to hold such a diplomatic rank (to which he was appointed at the age of 34), and who, in a riveting speech almost 10 years ago in Norway, where he was deputy ambassador, laid out his remarkable family history—including the Armenian origin of his father’s grandmother—and how that history and his own biography led him to become an Israeli diplomat.

Iran: A Threat to South Caucasus Peace and Security

Iran has consistently sought to sow havoc in Baku and overturn the secular government there, even before Mammadyarov’s 2013 visit to Israel. In 2007, fifteen Iranians and Azerbaijanis were convicted of such a subversive conspiracy. In 2008, a plot by Lebanese Hezbollah, aided by Iranian services, to blow up the Israeli Embassy in Baku was foiled. In late 2011, the Azerbaijani journalist Rafig Tagi (subject of a death fatwa from an Iranian ayatollah since 2005) was murdered in Baku after publishing an article criticizing the Iranian theocracy of the time. In early 2012, Azerbaijani police broke up yet another Iranian-Lebanese terrorist cell organized by the IRGC together with Hezbollah. And the list goes on.

So it is nothing new that—in addition to the diplomatic, economic and military provocations by Iran against Azerbaijan mentioned above—simple outright attempts to subvert and overthrow the government also continue. Just this month, Baku detained an illegally-armed group of Azerbaijani citizens trained and funded by Iran’s intelligence services. They had been indoctrinated against the Baku government under the guise of “radical-extremist religious ideas”, viz., the theocratic Twelver doctrine, of which Iran is the only state exponent in the world. Not long afterward, Azerbaijan’s State Security Service exposed an Iranian spy network in Baku and undertook measures to suppress its subversive intelligence activity.

Iranian antipathy toward Azerbaijan ultimately has deep and complex historical roots. It is nevertheless possible to identify three proximate causes of it in the present day. First, Azerbaijan’s independence attracts the attention of the ethnic Azerbaijani minority in Iran, concentrated in the northwest of the country, who now seek autonomywithin a federalized Iran. Second, Tehran is hostile to Baku’s autonomous foreign policy, including not only its friendship with Israel but also its generally westward-looking orientation in security and energy policy. Third, notwithstanding the IRGC’s completion of their “soft coup” against the mullahocracy about three years ago, Shi’ite Azerbaijan’s secular state model still gives the lie to the continuing millenarian Twelver pretensions of the regime in Tehran.

From all the preceding, it would seem that there is no “short-term fix” for the tensions that Iran is provoking in the region. The country adheres to the Sino-Russian centred axis that seeks to replace the current international system with another where the democratic West is ultimately subordinated to totalitarian-autocratic powers.

The manipulation of Western elites is part and parcel of this strategy. Armenia is lockstep in this, mobilizing its diaspora—particularly in France and the US—so as to vitiate the West’s action in defence of its own objective interests: not just concerning Armenia’s conflict with Azerbaijan, but moreover Western policy toward Iran in general.

Armenia is and has been for the last 30 years, since independence, an ally of Iran. Their joint co-operation is taking on a still more intense dynamic since the end of the Second Karabakh War. The situation is complicated further by the international dimensions of the disastrous economic and political abyss into which the Tehran regime has been leading Iran for years. This abyss is being further excavated by the IRGC’s having taken, a few years ago, full control of the country away from the theocratic elite who originally created it.

Barring regime change, it seems unlikely that Iran alters its aggressive policies in the foreseeable future. This would seem to be so, not only because its own elite is so invested in these policies, but also because they does not wish to see Turkey and Azerbaijan establish a trans-Caspian trade route via the Zangezur corridor. Such a corridor would diminish further Iran’s own stature and influence in the broader region.

Post Views: 171
Previous Napier: We Will See the Return on Capital Investment on a Massive Scale
Next Bosnia is Becoming Depopulated – What to do About it?