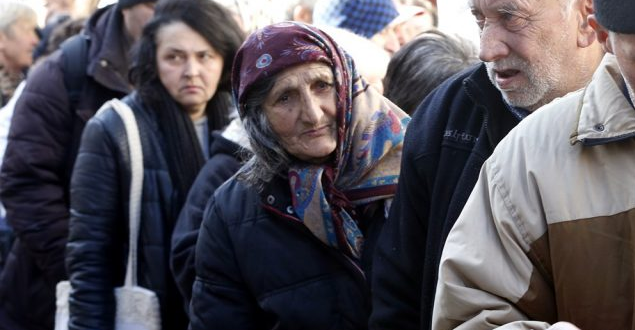 Bosnia is Becoming Depopulated – What to do About it?

If the political class doesn’t get to grips with the mass exodus of the young, and give them more opportunities, they risk ending up with no one to rule over.

Ivisited my maternal birthplace of Prusac near the central Bosnian town of Donji Vakuf twice last summer. Once a vibrant community, what was striking about it in August was its sheer emptiness. I encountered a few elderly people, but no youngsters.

Bosnians are leaving Prusac en masse and this part of Bosnia in search of a better future in Western Europe. Three of my first cousins have left and a fourth is preparing to leave. I was told that close to 50 homes have been locked and remain empty, as their owners have left.

The situation in eastern Bosnia is even more glaring. I drove through the region a few months ago and drove for long before encountering anyone. Cars with Western European license plates were a sign that the Bosnian diaspora was visiting. But, except for the summer and the diaspora, eastern Bosnia is increasingly empty.

Even the situation in Sarajevo is alarming. The capital is full of diaspora and tourists over the summer, but not so from October to May. When I first started working as a teaching assistant in Sarajevo in 2009, I had almost 1,000 students. Now I have around 200.

What these visible signs show is that, among the many challenges facing Bosnia, one is rapid depopulation. The last census conducted in 2013 registered a population of 3.5 million, a huge drop on the pre-war figure. It was far from certain even then that the census reflected reality. Almost a decade later, it is clear that the official statistics have yet to catch up with a mass emigration of Bosnians.

It is estimated that more than half-a-million citizens left Bosnia between 2013 and 2019. Last year alone, around 170,000 citizens are estimated to have left.

Various estimates place Bosnia’s current population at around 2.7 million. Given the trends, if a new census were to be held, it is far from clear that the population now would pass the 2.5 million mark.

While emigration is not new in Bosnia’s recent history, what’s happening now is more alarming. In the 1960s and 1970s, thousands of people left to work as gastarbeiters, in what was then West Germany, and in Austria.

Many left their families behind in Yugoslavia and ultimately came home after retiring. Then, in the early 1990s, hundreds of thousands of Bosnians sought refuge from the war, primarily in Western Europe and the US. This led to the formation of new diaspora communities.

Unlike these two previous waves of emigration, today the youth, young professionals and, frequently, whole families, are leaving in large numbers. The pull factors of employment and a better life in western Europe contrast starkly with Bosnia’s endemic corruption, political party-based clientelism and constant political tensions and instability.

Apart from the unemployed, a significant number of Bosnians with seemingly decent jobs are also leaving in search of a more promising future. This makes the current depopulation particularly worrisome.

While some analysts have seen EU membership as a panacea for many of the challenges facing Bosnia, there are two problems with this. First, full membership of the EU will not materialize in the near future. Second, young people from the EU member states in the Balkans are also leaving.

On my recent trips to Greece and Romania, I heard that young people are leaving and heading for Germany. The situation is similar in Croatia, a member of both the EU and NATO.

Given these population trends in Bosnia, one of the most pressing priorities for whoever forms new governments is to tackle this challenge of mass emigration. As Croatia’s case shows, there is no guarantee that quick EU membership would stop or even slow down emigration.

How best to respond to massive population decline is a key challenge and one in which there may be no good solutions. But governments could take several specific steps.

First, they should tackle the rampant corruption. Many politicians pay lip service to this goal but have yet to take concrete steps. Corruption eats away at the country’s future.

Second, they should open up employment opportunities. This particularly applies to the public sector. Young Bosnians are voting with their feet because they are unable to get a decent job and a solid salary in their own country.

Third, the private sector needs to be given space to thrive. The various taxes levied on private employers should be reduced.

Fourth, they should offer incentives for freelancers. Instead of introducing new taxes, the new government should give freelancers incentives to work for foreign companies from Bosnia.

Fifth, they should subsidize housing and provide grants and cheap loans to young people to be able to buy apartments. The price of real estate has skyrocketed in the past few years and only a government intervention in the form of grants can enable young people to own property.

Sixth, they should focus on improving the quality of everyday life. This should start with major reforms in the health sector and in public transport but extend to include new infrastructure projects.

Most of the young people that have left Bosnia did so because the system is rigged and unjust. Instead of conducting politics the way they did in the post-war period, the politicians need to wake up to the reality of the mass exodus currently underway and its long-term implications.

Unless young doctors, engineers, economists, IT specialists and others see a future for themselves in Bosnia, the country faces a grim reality in the years ahead. If the everyday lives of citizens are not improved, the country’s political leaders may end up having no one to rule over.