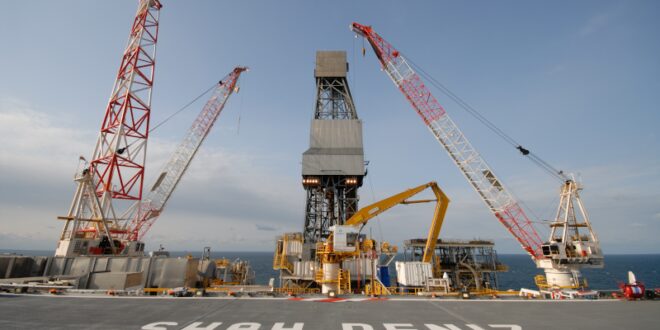 Azerbaijan has begun importing gas from Russia under a deal which should enable Baku to meet its own domestic demand but which raises serious questions over its recent agreement to boost exports to Europe.

Russia’s state gas producer and exporter Gazprom announced on November 18 that it had begun supplying gas to Azerbaijan’s state gas company SOCAR on November 15 and would supply a total of up to a billion cubic meters through March 2023.

Neither Azerbaijan’s Energy Ministry nor SOCAR replied to questions from Eurasianet seeking confirmation of the agreement, details of which remain unclear.

In a statement to Azerbaijani news agency APA, SOCAR said that it had long cooperated with Gazprom and that the two companies “are trying to optimize their infrastructure by organizing the mutual exchange of gas flows.”

The deal was signed just ahead of the mid-winter peak demand period, as Azerbaijan will be seeking to maintain supplies to its domestic gas customers while also meeting its export commitments to Georgia and Turkey, as well as its recently expanded trade with Europe.

That increase was intended to help Brussels offset the loss of supplies of Russian gas, which have been cut by Moscow in retaliation for EU sanctions imposed following Russia’s invasion of Ukraine.

While the deal has been highly touted both in Brussels and Baku, it was never made clear where exactly the extra gas would come from.

Problems with the commitment emerged as early as September, when Azerbaijan Energy Minister Parviz Shahbazov announced that Azerbaijan would export only 11.5 billion cubic meters to Europe this year, giving no hint as to why the export target had shrunk.

Even where this more modest extra volume will come from remains unclear.

A source close to the consortium which owns Azerbaijan’s giant Shah Deniz gas field, which currently supplies all of the gas Azerbaijan exports, confirmed to Eurasianet that no new export contracts have been concluded and the field is currently only contracted to supply the 10 billion cubic meters previously agreed.

Now, the news that Azerbaijan will import gas from Russia this winter suggests that Baku intends to use the Russian gas to supply its domestic market in order to free up gas and enable it to meet its commitment to Brussels.

The sanctions imposed by the European Union against Russia don’t apply to Azerbaijan, which remains free to import as much Russian gas as it wants.

But the new deal contravenes the political intention of the July agreement, which was agreed specifically to boost the volumes of Azerbaijan gas flowing to Europe so as to help the EU reduce its dependence on Russian gas.
Longer-term implications

The fact that part of those imports from Azerbaijan are being facilitated with help from Moscow suggests that Brussels’s efforts at diversification may be in vain, and not just in the short term.

Under the deal signed in July, Baku also agreed to double exports through the Southern Gas Corridor to 20 billion cubic meters a year by 2027 – the maximum that the existing pipeline network can carry.

That increase will be expensive and will take time to realize, requiring both the addition of new compressors to the existing pipelines as well as huge investments in Azerbaijan’s gas fields to produce the necessary gas.

As yet, no investment decision has been taken to expand the three pipelines which make up the Southern Gas Corridor that transports Azerbaijani gas to Europe, while questions remain over where the additional 10 billion cubic meters per year of gas will come from.

BP confirmed earlier this year that the giant Shah Deniz gas field which it operates is incapable of supplying all the additional 10 billion cubic meters required.

Azerbaijan does have some other small gas fields, but production from those is not expected to be sufficient to meet Baku’s undertaking to Brussels, either, raising the prospect that gas would have to be sourced from other countries in the region.

This revived long-standing hopes that Azerbaijan could transit gas from its neighbor across the Caspian, Turkmenistan, which boasts the sixth-largest gas reserves on the planet.

Relations between Baku and Ashgabat have improved considerably over recent years, culminating in a groundbreaking three-way gas swap agreement with Iran in December 2021, under which Turkmenistan pledged to supply between 1.5 and 2 billion cubic meters of gas a year to northeastern Iran and a similar amount of gas would be supplied from northwestern Iran to Azerbaijan.

Widely hailed as a rare and remarkable example of regional cooperation, that agreement had been viewed as a possible short-term source of extra gas for Europe.

However, the current status of the deal is unclear. Azerbaijan’s unexpected need to import Russian gas raises the suspicion that that agreement may have fallen foul of deteriorating relations between Baku and Tehran.

One of those options is believed to be a U.S.-backed project to pipe gas currently flared from some of Turkmenistan’s Caspian oil fields onshore from where it could be exported.

Post Views: 213
Previous The Impact Of Designating Russia A Terrorist State – OpEd
Next MINUSMA at a Crossroads