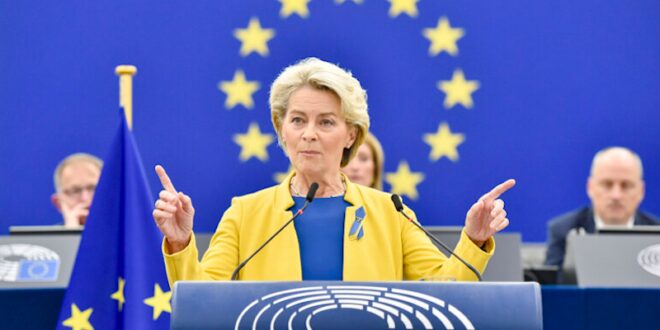 While symbolic and non-binding, the decision by the European Parliament (EP) to formally recognise Russia as a state sponsor of terrorism is a significant development since Russia’s full-scale invasion of Ukraine began back in February. Given foreign policy remains a core competency of the 27 individual EU member states, national parliaments would also have to make such a declaration for it to carry more weight. So far, the parliaments of Poland and the Baltic states have led the way in informing the EU’s approach on the terror designation, as they have all declared Russia to be a state sponsor. For Kyiv, the recognition signifies that it has friends in Europe who recognize Russia for what it is, and Ukraine’s struggle as something worth fighting for.

From a close trading partner and energy supplier to rogue terrorist regime, Russia’s image across EU capitals has fallen sharply over the course of the past year. With the Ukraine war set to continue well into 2023, the end of Russia’s isolation, and its ability to bounce back from its status as a terrorist state, remains a long way away.

The EP’s move is also a recognition of the increasing power states in Russia’s immediate periphery, including the Baltic states, Poland, and Ukraine, have in shaping Brussels’ strategic perspective. For Tallinn, Riga, and Vilnius, Russia was a terrorist state long before the war in Ukraine began, and their views on Russia were long seen as dramatic and overly worrisome by those in Western Europe. As Russia’s campaign of indiscriminate terror against civilian populations in Ukraine has continued, Paris, Berlin, and other capitals have had to face the stark reality as to Moscow’s intentions and methods of warfare. The missile bombardments on civilian targets and critical infrastructure means Kyiv is facing its harshest winter since World War II according to its mayor Vitaly Klitschko. Likewise, Ukraine’s neighbor and long-standing ally of Russia, Moldova, has been left in the dark both literally and figuratively in the words of its pro-EU President Maia Sandu. Sandu sees Russia as untrustworthy so long as it ‘deliberately kills people’ and stated that Moldova’s ‘only path should be towards the free world.’ Thus, as Russia terrorizes large swathes of Eastern Europe, it has revealed its true character to those furthest from its borders and reinforced the worst impulses of its long-existing character to those in its immediate neighborhood.

Given the risks of escalation that can be expected from Russia following the EP’s declaration, Europe clearly believes that it has the resolve to engage with Russia from the position of strength that is required for a protracted period of hostilities. The EU has worked tirelessly to develop relations with other states in Africa and the Middle East to lessen its dependence on Russian energy, and the bloc is set to become less reliant on Russia in the years ahead. Russia has lost 90% of its oil market share in northern Europe, down to 100,000 barrels per day (bpd) in November from a high of 1.2 million bpd prior to the invasion on 24 February. Austria, long one of the EU member states most dependent on Russian gas, now sources 21% of its gas imports from Russia, down from 80% prior to the invasion. The tide on energy dependence may be turning, but Russia retains allies in Europe such as Viktor Orban in Hungary and Aleksandar Vucic in Serbia, who are reluctant to sign onto EU-wide initiatives and are often willing to push the Kremlin’s narrative. Orban’s decision to wear a shirt bearing an image of ‘Greater Hungary’ shows that his revanchist aims remain closely aligned to the Kremlin, including claims of ownership to parts of neighboring Ukraine. Despite notable holdouts within Europe when it comes to the seriousness of the Russia threat, the EU’s largest and most important member states have begun earnest efforts to reformulate their Russia policies and reduce areas of critical dependency.

As the war in Ukraine continues in 2023, the EP’s terrorism label should not plunge the EU into complacency. All sides should prepare for the long-haul, and many problems remain unaddressed, such as the full implementation of Germany’s ‘Zeitenwende’, or ‘turning point’ in relation to its foreign and defense policy. While the US is unlikely to formally declare Russia a state sponsor of terror, it will continue to be the largest supplier of military aid to Ukraine, with many EU member states further down the list. The declaration from the EP should also come with further investments in European defense spending and less reliance on Washington for European security. Many states have signaled their willingness to do this, from Poland and the Baltic states to Germany and the UK, but 2023 will be the year to put words into action and formally adopt a long-term strategic posture towards Russia.

The war in Ukraine is unlikely to extend beyond Ukraine’s borders, with the greatest risk of false flag attacks and provocations existing in the breakaway region of Transnistria and Moldova proper. Given Moldova and Ukraine are now formal candidates for EU membership, security guarantees under the threshold of NATO’s Article 5 would be an important signal to come from Europe. President Zelenskyy and the Ukrainian people may not be alone as they face their worst winter in living memory, but the onus remains on Europe to ensure that they are not alone when Russia is engaging in less overt, but no less serious forms of terrorism against the Ukrainian people. The Baltic states and Poland will undoubtedly continue to shine a light on Russia’s atrocities, but the real test will come from Berlin and Paris. 2023 will arguably be the first year since the end of the Cold War in which the European continent is collectively engaging with Russia from a new perspective, largely driven from the east. From Lisbon to Bucharest, this perspective is informed by Ukraine, long seen as a post-Soviet buffer state, but now one of Europe’s greatest champions for freedom and a staunch defender of its values against the barbarism of Putin’s terroristic regime.