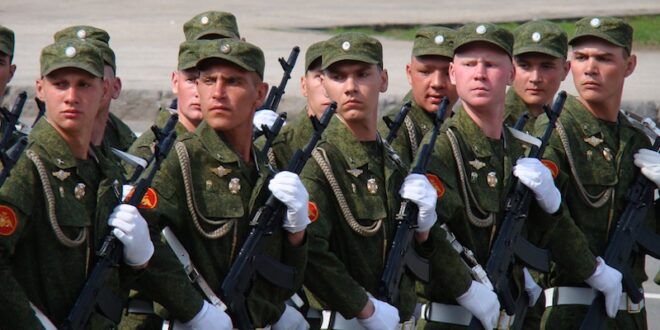 On 21 October 2022, Russian President Vladimir Putin announced a “partial mobilisation” of up to 3,00,000 military reservists, aged 18 to 50 in the Russian armed forces, to fight on the Ukrainian front. This marked the first such mobilisation since the Second World War. Notably, this development was preceded by the announcement of referendums in the Russia-controlled Ukrainian regions of Donetsk, Luhansk, Zaporizhzhia, and Kherson, thereby expanding the scope of Russian armed forces jurisdiction.

By 14 October 2022, approximately 2,00,000 individuals across Russia, including in the politically vibrant capital of Moscow, received their orders to join the Russian troops fighting in Ukraine. This unprecedented mobilisation, though, has also resulted in widespread protests, particularly in the rural regions as well as the Northern Caucasus.1 The fact that the Northern Caucasus comprises predominantly of Muslim citizens has further stoked minority apprehensions of being used as a cannon fodder during this mobilisation.

There has also been an exodus of those seeking to evade conscription to the Central Asian Republics (CARs), barring Turkmenistan which does not provide visa-free access to Russian citizens. Notably, Kazakhstan and to an extent Kyrgyzstan, have welcomed the Russian influx2 while Tajikistan and Uzbekistan have maintained a stoic silence. This Russian influx has not only caused domestic reverberations in the CARs but also impacted the migrant Central Asian labour force based in Russia.

There are approximately four million Central Asian migrants in Russia. These include two million Uzbeks, one million Tajiks, 2,00,000 Kazakhs, and a slightly lesser number of Kyrgyz.3 These migrants work primarily in Russia’s construction and agricultural sectors. Amidst the economic crisis in Russia, these Central Asian migrants face a daunting future. The surge in outbound airfare4 on account of the large Russian citizens exodus has only restricted their ability to leave the Russian shores.

Meanwhile, the proposed enlistment of Central Asian migrants in the Russian armed forces, facilitated by the Sakharova Migration Centre, is a catch-22 situation. The lure of financial assistance and a reduced waiting period to acquire Russian citizenship is offset by the uncertainty of heading into a dangerous frontline.5 This quandary is further compounded by the fact that Uzbekistan, Kyrgyzstan and Tajikistan have warned their citizens of penal action, including imprisonment, if they enlist in the Russian armed forces.6 Notably, close to 40 per cent of Central Asian migrants have expressed willingness to return home.7

By some accounts, at least 7,00,000 Russians, seeking to avoid conscription, have sought refuge in neighbouring CARs. Their preferred destination is Kazakhstan,8 due to its geographical proximity to Russia, followed by Kyrgyzstan, Uzbekistan, and Tajikistan. This influx, inevitably, affects the CARs. The Russian influx has worsened the regional economic slowdown. Rising inflation and food shortages have made things worse leading to large-scale discontentment.9 Many also see the incoming Russians as a business opportunity. In several cases, house owners, especially in the urban centres, have raised rent by a factor of three while evicting local low-income families and students.10

The Russian influx could also destabilise the domestic financial markets amidst the wide gulf in labour quality11 between locals and the more skilled Russians—the latter potentially monopolising Central Asia’s job markets. These developments could potentially rekindle the historical memory of the repressive Czarist and Soviet rule which in several instances undermined indigenous Central Asian culture.12 Arguably, the existing social contract between the state and the people is at stake.

Moreover, the polarisation and the formation of the “us vs them” camp, anchored in Russophobia, could undermine the domestic Central Asian architecture. Notably, in Kyrgyzstan and Kazakhstan, nationalist groups and individuals—Bashtan Bashta Movement and Kuat Ahmatov respectively—could use the influx as an opportunity to flame Russophobia for their political gains. Earlier, the Bashtan Bashta had raised the issue of decolonisation on the pretext of Ukraine.13 They targeted Russia and regional organisations like the Eurasian Economic Union (EEU) and Collective Security Treaty Organization (CSTO), both of which are Russia-dominated organisations.

In the same vein, Kuat Ahmatov and his group have held language patrols, including one in 2021, and posted videos on his YouTube channel—Til Maydani Online Party—targeting the Russian language.14 Despite evading arrest and escaping to Ukraine, he continues to have a following in Kazakhstan.15

A growing emphasis on Kazakh nationalism is taking place at a time when Russia–Kazakhstan relations have faced turbulence. Comments and reactions by the Kazakh leadership concerning the War in Ukraine and the referendums conducted,16 presumably driven by the inherent fear of facing similar military aggression, have irked the Kremlin.17 Notably, the large presence of ethnic Russians, particularly in Northern Kazakhstan, would have inevitably increased the Kazakh leadership’s nervousness amidst ongoing irredentism in Ukraine.

Russia’s partial mobilisation has impacted regional domestic dynamics, especially so in the CARs. In the long run, this could foster stronger Russophobia, including towards the Russian minority population residing in Central Asia. At the same time, new alignments could take place in Eurasia amidst Central Asian nations’ emphasis on a multi-vector foreign policy—a euphemism for diversifying relations beyond Russia. This is notwithstanding the fact that the majority of CARs continue to see Russia as an essential partner, reflected in most CARs having abstained from voting on UN resolutions related to Ukraine.18

Post Views: 230
Previous The Geo-Politics Of Natural Gas To Europe – Analysis
Next The Impact Of Designating Russia A Terrorist State – OpEd