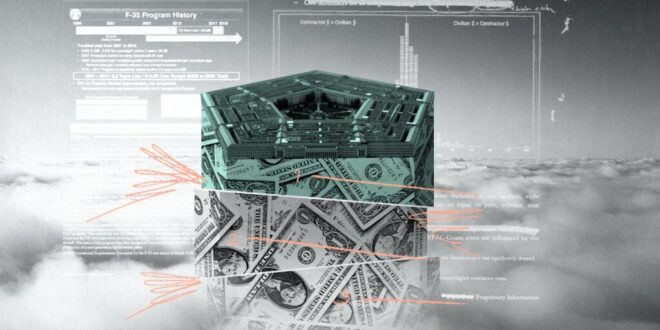 Pentagon fails to pass new financial audit, unable to account for over $2 trillion in assets

The US Department of Defense has, for the fifth straight year, failed to pass a financial audit, with only seven out of the Pentagon’s 27 military agencies receiving a passing grade.

“We failed to get an ‘A’,” Mike McCord, the Pentagon’s comptroller and chief financial officer, told reporters last week, announcing the results of the Pentagon’s fifth-ever financial audit.

“I would not say that we flunked,” he added, despite his office acknowledging that the Pentagon only managed to account for 39 percent of its $3.5 trillion in assets.

With this failure, the Pentagon has kept its spot as the only US government agency to have never passed a comprehensive audit. It also highlights the US war department’s persistent lack of internal financial control, its poor budget estimations and rampant overspending.

A clear example of this is the F-35 program, which has gone over its original budget by $165 billion to build a plane tasked to perform many different tasks, none of which it does well.

The Pentagon is slated to buy more than 2,400 F-35s for the Air Force, Marines, and Navy. The estimated lifetime cost for procuring and operating these planes – $1.7 trillion – would make it the Pentagon’s most expensive weapons project ever.

A 2021 Pentagon assessment of the F-35 found 800 unresolved defects in the plane.

There is also the current plan to expand Washington’s ship production, as part of the Pentagon’s obsession with preparing for a potential war with China.

While the Pentagon estimates the average cost of this shipbuilding initiative to be $27 billion per year between 2023 and 2052, the Congressional Budget Office (CBO) contends this, claiming that the average annual cost of the plan will be over $31 billion, meaning the Navy is underestimating costs by $120 billion.

Furthermore, in 2019 alone, the Pentagon made $35 trillion in accounting adjustments – a figure larger than the entire US economy.

The Pentagon budget is not only gargantuan, but replete with waste – from vast overcharges for spare parts, and weapons that don’t work, to forever wars with far-reaching human and economic consequences.

These shadowy practices have, however, boosted the profits of US weapons makers like Lockheed Martin, Raytheon, Boeing, and Northrop Grumman, with major gains made despite the challenges posed by inflation and supply chain issues caused by the coronavirus pandemic.

Along the same lines, the US government is expected to reach a $1 trillion defense budget by 2027, if not before, as the White House has already increased the Pentagon budget to $773 billion for fiscal year 2023.

Earlier this year, reports revealed that the Pentagon is planning a widescale campaign to hasten arms sales to US allies in a bid to compete with other world powers, and to replenish the stockpiles of countries that have provided Ukraine with weapons and military equipment.

Washington has in recent months bolstered its already overbearing presence in West Asia, including in Yemen and Syria, while continuing its aggressive policies against Iran.

The Pentagon is also blamed for abusing US legislation to wage “secret wars” worldwide, of underreporting civilian deaths in US airstrikes, and has on several occasions cleared US troops from responsibility for war crimes.

Post Views: 197
Previous Iraq announces redeployment of troops to borders with Iran and Turkey
Next Iranian colonel assassinated by Israel near Damascus: IRGC