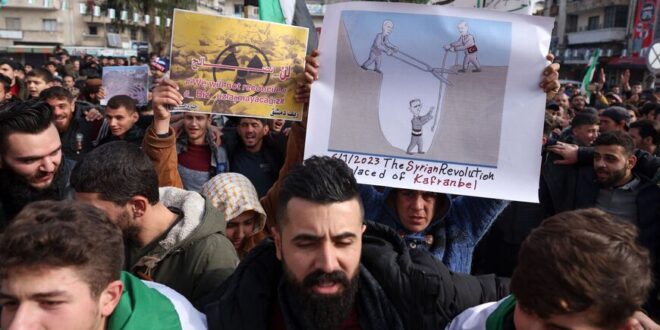 Turkey’s bid to reconcile with the Syrian government has left many Syrian refugees in the country on tenterhooks as Ankara faces pressure to cut a deal with Damascus on the return of the Syrians amid rising anti-refugee sentiment in a critical election year.

Turkish President Recep Tayyip Erdogan signaled readiness to meet with Syrian leader Bashar al-Assad last week after the two countries’ defense ministers met in Moscow as part of trilateral talks involving their Russian counterpart. The refugee issue was high on the agenda of the landmark meeting, according to the Turkish Defense Ministry.

Many Syrians in Turkey appear unwilling to return as long as Assad remains in power, fearing persecution. Others dread the prospect of uprooting themselves again after more than a decade of struggle to build new lives in Turkey.

Foziya Al Darid, a researcher who recently completed her master’s degree at Artuklu University in Mardin, southeastern Turkey, cannot even imagine returning to Syria. She has worked hard to settle her two children in Turkey and she now plans to begin her PhD next year. “It took us a long time to get over our past lives and our memories in Syria, to be able to move on and continue our new life,” she told Al-Monitor.

Erdogan’s quest for fence-mending with Assad has left many refugees stunned including Orwa Khalifa, a Syrian opposition journalist based in Gaziantep, near the Syrian border. “This worries all Syrian refugees in Turkey, especially those opposed to the Syrian regime and those wanted by the security forces,” he said. “The fear of handing them over to the Syrian regime is increasing day by day.”

Erdogan’s public overtures toward Assad follow years of a quieter policy of push-and-pull factors to move Syrians out of Turkey. In May, he touted that about 500,000 Syrians had gone back to Turkish-established “safe zones” in northern Syria since 2016 and announced new housing projects that he said would ensure the “voluntary” return of another 1 million.

Some 3.5 million Syrians officially registered as under “temporary protection” remain in Turkey as of late December, according to figures by the migration agency. And with asylum-seekers from other countries, Turkey’s refugee population stands at about 4 million, the largest of any host country in the world. Turkish opposition parties say the actual numbers are much higher.

The refugees have become a key topic ahead of Turkey’s presidential and parliamentary elections due in June. Erdogan’s government is grappling with runaway inflation and other economic woes as anti-refugee sentiments and hate crimes are on the rise. As it mounts its strongest challenge yet to Erdogan’s two-decade rule, the opposition says it will remove all Syrians within two years after the election. Opinion polls show that nearly 60% of Turks are in favor of Erdogan meeting with Assad and even larger numbers want the Syrians to go.

Many Syrians think that long-term settlement in Turkey is no longer an option and are starting to plan accordingly. “Is it possible to join a society that rejects you?” asked Ghazwan Koronful, director of the Free Syrian Lawyers Association in the Mediterranean city of Mersin.

For Ayham Abdulwali, a Syrian university student living in Antakya, close to the Syrian border, Erdogan’s about-face on Assad is largely motivated by domestic politics and the tough race he faces for reelection. Co-opting the opposition’s popular scapegoating of Syrians is one way Erdogan can cut into their support.

Nevertheless, he doubts that Erdogan’s government would fully normalize ties with Damascus, telling Al-Monitor, “For me, there is still no reason for total panic.”

Whatever the motives behind Erdogan’s reversal on the refugee issue, it remains to be seen whether fence-mending with Assad will actually lead to the return of the Syrians. “There is an expectation in Turkey and within the Turkish public that refugees will return once there is normalization of relations with the Assad regime. However, in reality, we know that the situation is quite the opposite,” said Omer Ozkizilcik, an Ankara-based foreign policy and security analyst. He cited the situation in Jordan, where most Syrian refugees remain even after Amman reengaged with Damascus.

Whether the Syrian government is able or willing to facilitate large-scale refugee returns is an open question as well. Damascus is already struggling to provide food and services in areas under its control amid a battered economy and ongoing drought.

Koronful, however, expects that Ankara will terminate its temporary protection program for Syrians in the coming year, regardless of the outcome of the elections. It would trigger a rise in irregular migration to Europe or Middle Eastern countries that offer visas to Syrians. “There will be a new wave of immigration by sea to Europe in spite of all the hardships and risks of death that will face them,” he said.

All Syrians interviewed for this article cited a growing fear of deportations. According to UN data, over 29,000 Syrian refugees returned voluntarily from Turkey to Syria last year. But four Syrian men told Al-Monitor that they had been arrested in Istanbul earlier this year and deported to northern Aleppo. One of them, who declined to be named, said he had been forced to sign a voluntary return form, calling into question the agency departing Syrians have in the process.

Khalifa, the journalist, said he was very worried. “If I am deported to Syria, regardless of the area, whether it is controlled by Jabhat al-Nusra or the factions affiliated with Turkey or the Syrian regime, I will be killed,” he said.

Ismael Abdallah, a Syrian novelist who has lived in Mardin since 2014, is cautiously optimistic about the potential rapprochement between the Turkish and Syrian governments. “Maybe it will be a positive thing,” he told Al-Monitor. “The Turkish government will be able to pressure the Syrian regime to accept our return and guarantee that we will not be harmed.” He quickly admitted, however, that he is the odd man out from other Syrians in Turkey.