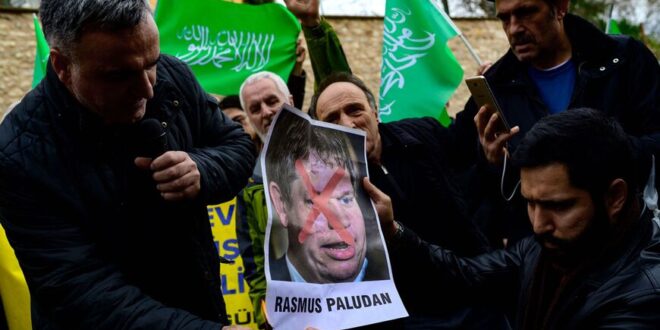 Turkish reactions to protests in Stockholm — in particular the burning of a Quran by a far-right figure — have shown a growing gulf between the countries as Sweden and Finland try to win Turkey’s support for their NATO membership. The Quran burning by anti-immigrant activist Rasmus Paludan outside the Turkish Embassy in Stockholm Saturday sparked three days of protests across Turkey.

“Those who encourage or excuse this perversion have no doubt considered its consequences as well. … If you are really respectful of human rights and freedoms, then you will first respect the religious beliefs of Turkey and Muslims. If you don’t show this respect, sorry but you won’t get any support from us about NATO,” he said in a televised speech after a cabinet meeting.

Turkish Defense Minister Hulusi Akar, who last week cancelled a meeting with his Swedish counterpart as the anti-Turkish demonstrations were given the go-ahead, led the political response in Ankara.

He told a meeting of military commanders Monday, “They are asking us for support for the defense and security of their country but they are rejecting our demands for the fight against terrorism.”

Akar went on, “It is not acceptable to turn a blind eye to all kinds of despicable, disgraceful and disgusting initiatives against Turkey, our president, our flag, the holy Quran and our sacred values, and to remain silent and imprudent against them.” He added,“If it goes [on] this way, our attitude is very clear. We expect Sweden and Finland to fulfill their commitments by showing the power and strength of the state as soon as possible and putting an end to the disgusting and despicable initiatives.”

The reaction in Turkey to Paludan’s stunt and other anti-Turkey protests, such as the hanging of an effigy of Erdogan in Stockholm a few days earlier, has fueled worries about how Ankara will handle Sweden and Finland’s bid to join NATO, which must be ratified by all 30 NATO members.

Turkey has delayed their accession, arguing the Nordic countries need to tighten their approach to counter-terrorism when it comes to the Kurdistan Workers Party (PKK) and members of a group it blames for a 2016 coup attempt. Ankara has demanded they extradite or deport some 130 individuals it says are suspected terrorists.

There was a separate protest by leftist and pro-Kurdish groups against Sweden’s bid to join NATO in Stockholm on Saturday. Speakers stood in front of a large red banner reading, “We are all PKK.” The group is listed as a terrorist organization in Turkey, the United States and the European Union.

On the streets of Turkey’s cities, chanting protesters railed against the burning of the Quran.

Riot police stood guard behind metal barriers at the Swedish consulate building on Istanbul’s Istiklal Street on Saturday as some 250 people gathered. Protesters set fire to the Swedish flag and a photograph of Paludan. Others waved green flags carrying the Islamic proclamation of faith and a banner reading, “We condemn Sweden’s state-supported Islamophobia.” Consulate staff had taped a handwritten sign to a window that read, “We do not share that book-burning idiot’s view!”

“Sweden’s hostile attitude towards Muslims and our country is not limited to this,” Talat Yavuz of the Confederation of Public Servants’ Trade Unions said at a follow-up demonstration Monday.

He added, “There have been other similar incidents recently. In Stockholm, which has turned into a cell of some terrorist organizations, excessive actions were carried out against our president and the Swedish authorities remained unbelievably silent.”

In a strongly worded statement, the Turkish Foreign Ministry condemned the “vile attack on our holy book, the Quran,” saying, “Permitting this anti-Islam act that targets Muslims and insults our sacred values under the guise of freedom of expression is completely unacceptable. This is an outright hate crime.”

It went on, “This despicable act is yet another example of the alarming level that Islamophobia and racist and discriminatory movements have reached in Europe.”

The demonstration was also condemned by other Muslim states such as Saudi Arabia, Jordan and Kuwait.

Swedish Prime Minister Ulf Kristersson tweeted that freedom of expression was vital for democracy but denounced disrespect for the Quran, saying, “Burning books that are holy to many is a deeply disrespectful act. I want to express my sympathy for all Muslims who are offended by what has happened in Stockholm today.”

A close associate of Turkish mafia figure Alaattin Cakici, who is closely tied to Erdogan’s ultranationalist political ally Devlet Bahceli, threatened attacks on Swedish interests in the wake of the Quran burning.

Uzeyir Cakmaktas tweeted that “armed [and] unarmed actions against Sweden and Sweden’s missions abroad will not be counted as a terrorist attack.” Both Cakmaktas and Cakici are linked to the far-right Grey Wolves movement, which has a record of political violence in Turkey and Europe.

Even before Paludan’s actions, Turkey reacted strongly to Swedish authorities granting permission for the protests to be held, summoning the Swedish ambassador to the Foreign Ministry in Ankara on Friday.

A visit by Swedish Defense Minister Pal Jonson was cancelled, with Akar saying in a statement that such meetings had “become meaningless.” He said he had discussed the Swedish protests with Erdogan and had passed on Ankara’s reaction to Jonson at a meeting of the Ukraine Defence Contact Group on Friday.