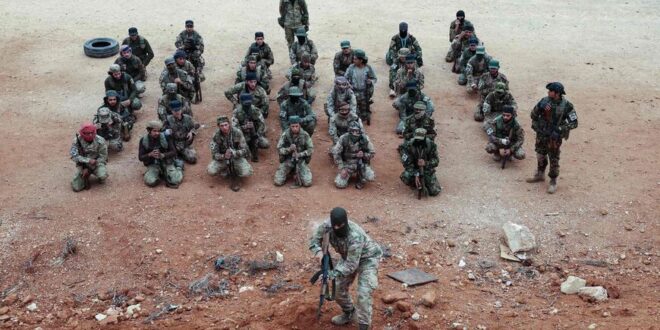 Ankara’s quest to restore ties with Damascus has left its Syrian rebel allies confused as Hayat Tahrir al-Sham, the jihadi group controlling Idlib, seeks to raise its profile and lure the disenchanted to its ranks.

As the Turkish-Syrian dialogue advances and the prospect of Ankara pulling the plug on its Syrian allies looms large for the rebels, Hayat Tahrir al-Sham (HTS), the jihadi outfit holding sway in Idlib, appears eager to take advantage of the confusion in the rebels’ ranks and expand its control.

Forces affiliated with the HTS-led al-Fatah al-Mubin operation room have mounted attacks along lines of contact with government troops in southern Idlib, northwestern Aleppo and northeastern Latakia, using infiltration tactics, according to Syrian press reports. Clashes reportedly intensified this week in the Jabal al-Zawiya area in southern Idlib, with al-Qaeda-linked groups such as Firqat al-Ghuraba and Ansar al-Tawhid also joining the fighting. The Syrian army sent reinforcements to several areas in southern and eastern Idlib as well as to Base 46 and a couple of towns to the west of Aleppo.

Earlier this week, Turkey also moved reinforcements to the Idlib countryside and northwestern Aleppo, according to the reports. Despite progress in contacts with Damascus, last week Ankara renewed its threat of a fresh ground operation against Kurdish-held areas, apparently as part of a pressure strategy.

Should the military escalation on the ground continue as Turkey presses ahead with fence-mending with Damascus, rebels from the Turkish-backed Syrian National Army (SNA) and other armed factions might gravitate to HTS, which stands out as the best organized and disciplined outfit, both on the battleground and in terms of civil administration via the so-called Salvation Government it has established in Idlib.

Keen on recasting itself as a moderate opposition force, HTS has disowned its roots in al-Qaeda and global jihad, claiming that its objectives are limited to Syria alone. In a move encouraged by Turkey, it has sought to eliminate rival radical groups in northern Syria. And since last summer, HTS has sought to expand its influence beyond Idlib — first to Afrin and then to Azaz, al-Bab and Jarablus, taking advantage of feuds between the Turkish-backed factions controlling those areas. Turkey’s quest for a new chapter with Damascus has offered the group a fresh opportunity.

HTS leader Abu Mohammad al-Golani now portrays his group as the sole standard-bearer of revolution in Syria. In a Jan. 2 video message titled “We will not reconcile,” Golani vowed to fight on until overthrowing the government in Damascus. In a meeting with local notables in Idlib the same day, he described the Turkish-Syrian dialogue as “dangerous” for the revolution and argued that the Syrian National Coalition (SNC) — a Turkish-backed coalition of opposition groups — can no longer represent the revolutionary forces, local media outlets reported. Yet he used moderate language on Turkey, displaying a pragmatic stand that rejects reconciliation but avoids confrontation with Turkey at the present stage.

Senior opposition figures, including the heads of the SNC and the self-proclaimed Syrian Interim Government, met with Turkish Foreign Minister Mevlut Cavusoglu in Ankara on Jan. 3 as protests erupted in northern Syria after the Turkish and Syrian defense ministers held a landmark meeting in Moscow in late December, facilitated by their Russian counterpart. Cavusoglu said he had assured the delegation that Turkey would maintain support for the Syrian opposition.

Turkey’s National Intelligence Organization reportedly asked the SNA to prevent the anti-Turkey demonstrations. The protests, however, continued and SNC chair Salem al-Muslet was physically assaulted in Azaz by an angry crowd accusing him of treason.

Among the armed groups, the SNA factions have largely refrained from strong reactions that could anger Turkey. The first to reject any reconciliation with Damascus was the Salafist group Ahrar al-Sham, whose eastern branch has collaborated with HTS, including in the latter’s attempt to seize Afrin. Later, the SNA’s Third Legion also issued a statement against Ankara normalizing ties with Damascus.

The discord between SNA factions continues to play into HTS hands. A case in point is the HTS intervention in a row over the control of the al-Hamran crossing, where lucrative revenues are at stake due to the passage of trucks bringing oil from Kurdish-held areas. Backed by HTS, Ahrar al-Sham and the Hamza Division took over the crossing from the Levant Front some time ago, with 15% of the proceeds now going to HTS. Irked by the shift, the “interim government” has recently asked the Third Legion to address the problem, prompting HTS to dispatch reinforcements to the region.

While the radicals’ stand in the face of the Turkish-Syrian dialogue is clear, questions linger as to what will happen to the SNA, which Ankara has backed and steered in line with its interests.

Since the meeting of the defense ministers in Moscow, Turkish statements on rapprochement with Syria have been accompanied with references to a prospective settlement to the Syrian crisis in line with the UN Security Council’s Resolution 2254 of 2015. Yet there is no convincing reason to suggest that Ankara’s U-turn will revitalize the stagnating UN-sponsored Geneva talks.

Meanwhile, a rebel commander quoted by BBC Turkish this week said that Turkish officials have brought up the model that the Syrian government used to reconcile with rebel groups in Daraa, southern Syria, and told them that a similar method could be negotiated should the parties agree on the terms. As part of Russian-mediated efforts, the rebels in Daraa were allowed to stay in the region on the condition they join the government forces, while rebels in eastern Ghouta, eastern Aleppo, Humus and Quneitra were evacuated to the north.

Integrating Turkish-paid SNA members into the Syrian army with certain guarantees could be considered as a likelihood, but the Daraa model might not work with jihadi militants. The deterrence of any Turkish policy in that respect would have its limits. The process might cause fresh rifts among armed groups and swell the ranks of the radicals.

Yet there is another critical factor to consider. Laying down arms and crossing to Turkey remains the last option of safe haven for rebels who have moved to Idlib and northern Aleppo from other battlegrounds in Syria. Will Ankara accede to the prospect of war-hardened militants becoming its own domestic issue? It appears reluctant to answer such disturbing questions for now as it awaits the moment the Turkish and Syrian leaders shake hands.