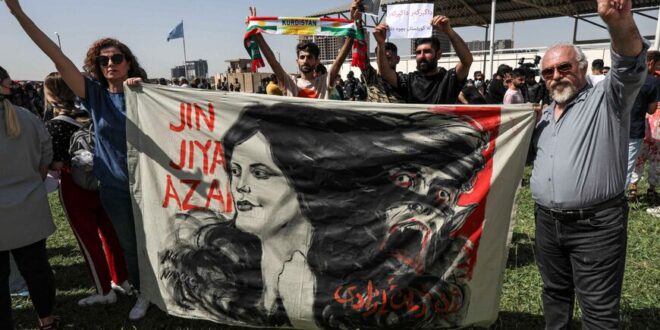 The Kurdistan Region of Iraq has become a key escape route for an unknown number of Iranian Kurds fleeing brutal repression and torture in Iran, but most fail to find security and stability in Iraq.

Since his release from an Iranian prison a month ago, Kayvan Samadi has been hiding in a safe house in the autonomous Kurdistan Region of Iraq, waiting for his wounds to heal.

“I am getting better day after day, but I’m not what I was before prison,” he told Al-Monitor, sitting in the guest room of a safe house in Iraqi Kurdistan. Samadi has seen seven doctors since arriving in Iraq on Christmas day, escaping Iran after three weeks of detention and torture last October.

Samadi, a young medical student in his 20s, was jailed by Iranian security services for treating hundreds of people wounded while demonstrating against the regime. A trained paramedic working with the Iranian Red Crescent since 2017, Samadi refused to stay put when protests erupted last September in his home city of Shno.

“The head of the Red Crescent there prohibited us from treating demonstrators, and because of this a lot of people died,” he said. “I saw it as my responsibility to help people.”

One week into the protests, Samadi formed an emergency medical team of a dozen people to treat those injured on the streets of Iran. “It was our way to participate in the revolution,” he said. The team — named the “Red Sun” in reference to the Red Cross and the Red Crescent — claims to have treated more than 700 protesters over a couple months.

But in trying to save those seen as “enemies” by Iranian authorities, they became targets themselves. Two Red Sun volunteers were killed in the streets while providing treatment and nine more are in jail, according to Samadi, who himself narrowly escaped execution by seeking refuge abroad. Samadi told Al-Monitor that he refused to sign a written confession that Iranian jailers had prepared for him. A few days after his release, he left to Kurdistan, worried about being arrested again or killed like two of his colleagues while treating protestors.

Thousands may have fled

Since the protests erupted, hundreds — maybe thousands — of Iranian Kurds are thought to have fled their homes in the heavily-repressed Kurdistan province of Iran, to neighboring Iraqi Kurdistan. But Iraq is far from a safe haven for these exiles, who continue to live in fear of the Iranian regime’s reach and lack any protection or humanitarian support.

Iranian exiles crossing into Iraq share horrifying testimonies of repression and violence. Scrolling through his phone, Samadi digs out dozens of pictures of battered bodies: those of his patients, their limbs caked in dry blood and rigged with dozens of shotgun wounds; and of his own body, scarred by weeks of torture.

Samadi paid a heavy price for the lives he saved. Held for three weeks in prison, he was constantly beaten, burned, whipped and shocked with electrodes.

“Once, fed up, I gave them the middle finger. So they tried to cut it off my hand with a cutter blade,” Samadi said, showing a deep scar running at the base of his finger.

Many other exiles have similar experiences to share. “I saw death many times in Iran. Once, as I was driving around, I saw policemen shoot eight times into a protester,” Hayder (pseudonym), 41, a truck driver in his 40s, told Al-Monitor in an interview last month.

“One image stuck with me: a taxi driver who was shot at close range as he tried to get into his car to flee a protest. I will never forget this scene,” Hayder said.

Many left Iran after being arrested by the security services and threatened with a worse fate. Salah (pseudonym), a mechanic in his 40s from the city of Sina (Sanandaj in Persian), was arrested in the middle of the night after his first protest.

“My family looked for me everywhere. No one knew where I was,” he told Al-Monitor in a December interview. “After eight days, they finally found me at the intelligence services in Sina, and they managed to bail me out. Before releasing me, the judge told me: The next time we catch you at a protest, you will be executed.”

The threat of execution immediately prompted Salah to leave Iran. “When they let me out, I was terrified. The following day I went to the border and crossed to Iraq,” he said.

The number of people who, like Salah, enter Iraqi Kurdistan fleeing repression in Iran is unknown. Local authorities have been unable to provide data on border crossings, and do not track whether people are entering for humanitarian or political reasons since most of those who enter Iraq do so on tourist visas.

“No one who has crossed the border has approached us and said, ‘I have fled conflict or tensions there,'” a spokesperson of the Kurdistan Regional Government told Al-Monitor. Without statistics, it is difficult to get a sense of the scale of displacement from Iran, especially since many exiles immediately find refuge with relatives or Kurdish-Iranian political parties in exile, or continue their journey to Turkey and Europe.

But in many parts of Iraqi Kurdistan, particularly the eastern city of Sulaimaniyah, that is close to the Iranian border, residents say a surge has been noticed in the community of Iranian Kurds in exile. And as repression intensifies in Iran, many believe refugees will continue to trickle in.

“Those living in Iran today have three options: protesting and risking their lives, working for the regime or fleeing the country. That’s the choice I made,” Hayder said.

But staying in Iraq is hardly a long-term option, said the witnesses who spoke to Al-Monitor. Despite the relative safety of Iraq, fear lingers for many exiles, most of whom requested anonymity in this article.

“It’s safer here than in Iran, but I’m scared of Tehran’s security services. They are everywhere,” Salah said. “I’m worried about how me being here could impact my family. I spoke to them last night, and they are terrified of leaving the house. They worry about being arrested too.”

Samadi, who has already received death threats, lives in hiding in a bedroom somewhere in Kurdistan. To avoid being recognized, he covers his face and eyes every time he leaves the house for medical treatment. “I don’t even dare to open my curtains,” he said.

And many dread the moment they will have to cross back into Iran to renew their Iraqi visa. “Every time I go, I feel like I’m dying inside,” noted Hayder, who already went to the border once to renew his visa by crossing to Iran and immediately back to Iraq. Salah will have to take the same risk in a month and worries about being arrested by border police. But he said there is no alternative since he doesn’t have enough money to pay the visa overstay fees.

Without humanitarian support — other than what their own community can provide — finding stability is a challenge for Iranians in exile. Salah and Hayder have both found odd jobs (as a mechanic and a truck driver respectively) to get by, but for Samadi, lingering in Iraq is simply too dangerous. Unable to seek political asylum in Iraqi Kurdistan, some have already left Iraq, a precarious refuge, with their eyes set on Europe.