KABUL, Afghanistan – Afghan troops killed 33 Taliban militants, including several commanders, in three operations in the country’s volatile south, officials said Thursday.Twenty militants were killed in the Shah Wali Kot district of Kandahar province on Wednesday, while eight were wounded, the Interior Ministry said. It said two commanders were among the dead.

The U.S.-led coalition said that coalition forces and Afghan army soldiers battled militants in Shah Wali Kot on Wednesday, killing “several” enemy fighters. It was not clear if it was the same operation mentioned by the Interior Ministry.

In the nearby district of Zhari, six Taliban fighters were killed, including one commander, the Interior Ministry said. It said no police were hurt or killed in the operations.

In southern Ghazni province, seven Taliban were killed and four others detained by police Wednesday, said Mohammad Kazim Alayar, province’s deputy governor. The authorities recovered the bodies of the dead Taliban, he said.

Violence has spiked Afghanistan in recent weeks. More than 2,300 people have died in insurgency-related violence in Afghanistan this year, according to an Associated Press count based on U.S NATO, U.N. and Afghan officials.

The Ministry of Defense said a suicide attacker detonated his bomb near an Afghan army brigade commander in Gereshk district of Helmand province. The suicide attacker died but no one else was wounded, said Gen. Mohammad Zahir Azimi, the ministry spokesman.

Elsewhere, U.S.-led coalition and Afghan troops killed a suspected militant and detained three others in a raid on a compound in eastern Afghanistan, the coalition said.

The troops were searching the compound suspected of housing Taliban and foreign fighters in Mata Khan district in Paktika province, the statement said.

“The forces killed the adult male when he attempted to engage them during a search of the location,” the statement said.

During the search, troops discovered weapons and a video camera. Three people were also detained and would be questioned over “their involvement in militant activities,” statement said. 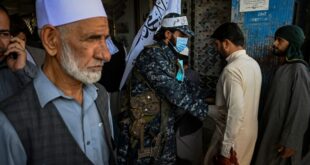 The Afghan refugee crisis: What does it mean for Iran?

The images of desperate Afghan citizens trying to leave their country, beyond highlighting a massive …