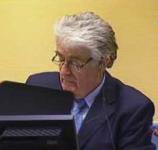 A new pre-trial status conference in the case of Radovan Karadzic is due to take place on April 2, 2009.

The Trial Chamber of the International Criminal Tribunal for the former Yugoslavia, ICTY, has announced that another pre-trial status conference in the case of Radovan Karadzic will take place on April 2, 2009. It also said that “a private meeting, to be attended by the indictee, the Prosecution and three Trial Chamber members” would be held on March 24.

“At this meeting we will discuss several issues pertaining to the trial preparations,” the Hague Tribunal’s decision reads.

The Hague Prosecution charges Karadzic, former President of Republika Srpska, RS, and General Commander of the RS Armed Forces, with a number of crimes committed in Bosnia and Herzegovina, including genocide in Srebrenica and ten other municipalities.

Karadzic’s Defence has complained about the holding of this meeting, arguing that “all trial-related activities should be discussed at public sessions”.

“The indictee thinks that all pieces of correspondence between the Trial Chamber and the parties need to be public, not private,” Karadzic’s complaint says.

The Trial Chamber rejected Karadzic’s complaint, and decided to hold the meeting, adding that “this type of meeting will be useful to all parties to the proceedings” because it will enable them to discuss freely “outstanding problems and possible solutions”.

“In addition, if there are still some issues that the parties would like to discuss at a public session, they are free to raise them at one of the future status conferences. The Trial Chamber considers that status conferences will be much more productive if they are scheduled after these meetings,” the Court’s decision reads.