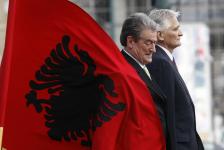 Albania and Bosnia and Herzegovina have agreed to improve economic and diplomatic relations and work jointly towards their faster membership in the European Union and NATO.

The agreement to improve relations between the two countries came during the official visit of Albanian Premier Sali Berisha to the Bosnian capital of Sarajevo on Tuesday. During the visit Berisha met the chairman of Bosnia’s Council of Ministers Nikola Spiric.

Berisha and Spiric also said that the two countries will also establish cooperation on the level of embassies in the nearest possible future.