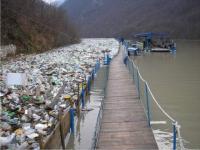 More than 2,000 tonnes of rubbish threatens to spill into Bosnia’s northwest town of Banja Luka, after a drop in water levels at a nearby hydropower dam damaged filter nets on the Vrbas river.

“The (waste filter) nets are completely destroyed. We have only managed to fix them temporarily but they hang on a thread and can burst any second,” one of the workers at the Eco-Center Bocac told Balkan Insight over the phone on Thursday.

The emergency situation came to light two days ago, apparently when a nearby dam of the Bocac Hydropower plant suddenly reduced the level of water in the Bocac lake under the allowed minimum, reportedly in an attempt to maintain the high level of electricity production, Eco-Center officials and workers said.

Officials from the Bocac Hydropower plant and the Power utility company in the Serb-dominated Bosnian entity of Republika Srpska have denied these allegations and said that they have kept water a full five metres above the minimum allowed height.

One way or the other, the sudden drop of the water level has ruptured Eco Center’s mesh nets which stop and filter tonnes of waste every day. Thanks to a quick reaction from its workers, who lessened cables and temporarily fixed the ruptured nets, an immediate ecological disaster was temporarily avoided.

Yet the mesh nets are seriously damaged and will most likely have to be completely replaced, Eco Center workers told Balkan Insight. The cost of restoring or replacing these filter nets is still unknown.
Banja Luka city authorities, who financially support the Eco Center, have ordered an urgent investigation of the incident, an analysis on whether there is real ecological threat to the city and possible solutions.
“Already by tomorrow we will know which measures should be undertaken,” Milenko Sajic, a spokesman for the city administration, told media. He added that the city administration has been always supporting and closely cooperating with the Eco-Center Bocac.

For Bosnia and Herzegovina, Eco Center Bocac is a unique organisation and plant. It was established in 2000 by the local Euro-Hem company which specialized in the production of detergents. The purpose of the Eco Center is to stop garbage from polluting the Vrbas river and flooding Banja Luka, which is some 50 kilometers down the river.

A year later, Eco Center has built mesh nets across the river which stopped and collected rubbish. Since then, the centre has been collecting and recycled more than 5,000 tonnes of garbage each year. Recycled garbage is compressed, packed and sold, mostly abroad.

Near the filter nets, the Eco-Center located in a deep and narrow canyon, has also established a small recreational centre with a restaurant, a small zoo and a beach on the beautiful green Vrbas River. Thanks to this plant, the Vrbas river is one of the few in Bosnia which remains clean enough to allow residents down the river to swim and enjoy water sports each summer.