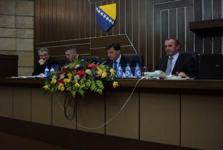 The Bosnian Parliament has adopted, in its first reading, a law envisaging better protection of local farmers against imported goods from neighbouring countries. If confirmed, this law could violate regional the CEFTA free trade agreement.

“Customs are being imposed on goods from Croatia and Serbia,” read the front-page title in the Banja Luka daily Nezavisne Novine on Tuesday.

“This is a direct violation of the CEFTA agreement and we have to be aware that adoption of this new law will most likely result in an international arbitration procedure and will trigger countermeasures from neighbouring and CEFTA member countries toward Bosnia and Herzegovina,” Bosnia’s Minister for Foreign Trade and Economic Relations, Mladen Zirojevic, warned during the heated debate at the session of the Bosnian House of Peoples, on Monday.

Despite these and other warnings from local and international experts and officials, the House of Peoples has adopted the disputed law in its first reading. The same law was previously adopted by the House of Representatives and is now expected to be sent into a parliamentary procedure for the final confirmation by both Parliamentary Houses.

The law envisages the re-imposition of full customs on imports such as meat, milk, dairy products, fruits, vegetables, alcohol and several other products produced in neighbouring Croatia and Serbia.

This is seen as a possible violation of the Central European Free Trade Agreement, CEFTA. CEFTA was established 27 years ago in order to facilitate free trade among non-EU countries in South-Eastern Europe and prepare them for EU membership. As of 2007, signatories of the CEFTA agreement include Albania, Bosnia and Herzegovina, Croatia, Macedonia, Moldova, Montenegro, Serbia and Kosovo.

For the first few years, Bosnia has officially had preferential treatment in trade relations with neighbouring countries. Yet, it failed to capitalize on that, as Serbia and Croatia, as well as some of the other countries, managed to limit Bosnian imports through other measures. Meanwhile, Bosnian leaders – weakened by their ethnic and political divisions – failed to react quickly and effectively enough to reinforce Bosnia’s trade position.

The situation is even worse now than when Bosnia had equal status with all other countries, and is being overwhelmed with imported goods from Croatia and Serbia.

A worsening economic and social situation in the country, suffering from the growing effects of the global economic downturn, has renewed requests from local farmers and producers for better government protection.

The controversy over the protectionist law is even greater, in light of the fact that the law was initially proposed by Jerko Ivanković Lijanović, a deputy in Bosnia’s House of Representatives. Brothers Jerko and Mladen Ivanković Lijanović are co-founders of the Peoples’ Party through Work to Progress as well as co-owners of one of the biggest local meat-producing companies, Lijanovic.

Media and other deputies accused Lijanovic family of securing additional support for the law in both Parliament Houses, by trading party votes in several local assemblies, the most important being, the town of Mostar.

The controversy over differing interests and implications behind this law triggered a lively and often heated debate at the House of Peoples’ session on Monday.

Yet, despite stark warnings from local and international officials, Jerko Lijanovic defended his position by citing CEFTA regulations which, according to him, allow unilateral measures such as this in a case of larger trade imbalances. According to statistics, Bosnia has negative trade with Serbia and Croatia, which often exceeds a 1-7 ratio.

Bosnia’s Foreign Minister Mladen Zirojevic, warned that Bosnia has received condemnations and criticism from neighbouring countries and international officials, only by putting the law to a first reading.

Zirojevic, as well as other experts stressed that there were other, better, smarter ways of improving competitiveness of local producers. Such comments were mirrored by German Member of European Parliament, Dorisk Pack, who was on an official visit to Sarajevo on Monday.

“We don’t do this in the EU. Bosnia and Herzegovina is a member of CEFTA and cannot behave like this,” she said in her address to a group of Sarajevo students on Monday, and added that Bosnia’s High Representative will have to intervene if this law is enacted.