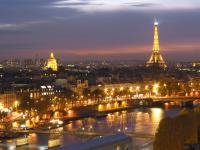 At the meeting, originally set for Thursday, but delayed due to the Government’s plane malfunction, Gruevski is expected to reiterate that that Macedonia has completed its part of the work regarding visa liberalisation.

He is also expected to lobby for the start of EU accession talks, as well as support for efforts to unblock Macedonia’s stalled NATO integration process.

France is considered as one of Europe’s greatest skeptics when it comes to liberalising the visa regime and further enlargement of the Union. The EU announced that Macedonia, Serbia and Montenegro will most likely be granted full visa liberalisation from sometime next year.

Gruevski on Wednesday met with Enlargement Commissioner Olli Rehn and High Representative Javier Solana in Brussels, where he said that his country’s EU accession talks benchmarks will soon be fully met.

The country hopes for a green light by the European Commission this fall for the start of its EU accession talks. Reforms in the judiciary, as well as several other issues are crucial.

Paris is also seen as close to Athens when it comes to the unresolved name row between Greece and Macedonia which hampers Skopje’s NATO entry, after Greece last year vetoed Macedonia’s entrance into the Alliance.