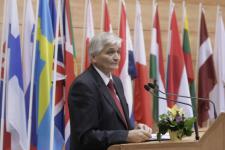 Work of the Bosnian and Herzegovina state government, the Council of Ministers, has been suspended until further notice, due to the ongoing disputes over which ethnic group will nominate the country’s new top negotiator with the EU, media reported on Friday.

“The Council of Ministers will not hold sessions until we resolve this appointment, because I don’t want to do less important things while putting these problems aside,” Bosnian state Premier Nikola Spiric said after he called for an early end of the government session on Thursday afternoon.

Spiric added that he didn’t care about the nationality of the appointee as long as he or she was “the best candidate.”

They have been fighting for the position of the head of country’s Directorate for European Integrations, DEI, since January this year when the previous director, Osman Topcagic, was appointed to the position of Bosnia’s ambassador to the EU.

Spiric, who is a Bosnian Serb, initially tried to fill the position himself, saying he would be acting until a proper candidate was appointed. Yet that decision met strong criticism from Bosniak and Bosnian Croat officials who said this would be a violation of rules and regulations. Since the DEI director answers directly to the Premier, Spiric would be his own boss.

Meanwhile, proper legal procedure for the appointment of the new DEI director was hampered by the ongoing quarrels among the ruling national parties, which were all claiming the important position for themselves.

This dispute has also been one of the reasons the country’s EU membership process has been slowing down and has been a major cause of frustrations and repeated warnings from top international officials.

Over the past few days, the selection process hit a wall after the Bosniac candidate, Bisera Turkovic, failed the written exam.

Media reported that Bisera Turkovic did not know some of the most basic information about the work of the EU, but Bosniac officials said she was deliberately flanked by Bosnian Serb and Croat members of selection commission. Bosniak members of commission than resigned, which according to the law means that a new commission has to be appointed and the selection process repeated.

After calling off the government session and temporarily suspending its work, Spiric called for consultations of the ruling national parties, to discuss and try to resolve the issue of this and other top appointments.

”I have done everything that I could and we will not work any more until the director is appointed,” Spiric said.