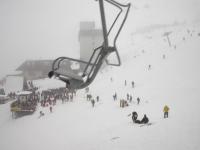 Serbia’s government is funding a new construction project in Kosovo, paving a road in the southern Brezovica ski resort.

Brezovica is located in the municipality of Shterpce, which is home to a significant Serb minority. The Kosovo daily Express reported that Serbia’s ministry of economy and finance had set aside 15,000 euro, which it has entrusted to a Serbian firm from Brezovica, Magistrala.

So-called parallel structures of government exist in the municipality, with officials from Belgrade and the government of Kosovo both wielding authority in the area.

A Serbian official, Stojan Dogankic, said what was important was that the road was being constructed. “Where the money comes from is not important. It is more important to pave the road”, he said.

According to Dogankic, officials from Kosovo’s ministry of transport and communications had considered investing in this road after visiting the municipality, but “nothing happened”.

Balkan Insight contacted the ministry’s senior information officer regarding Serbia’s funding of the road. He stated that “the office does not have the competency to answer such questions”.

Serbia remains interested in investing in parts of Kosovo that have large Serbian communities. This has involved building a Serbia Post and Telecommunications building in the town of Gracanica, and other constructions in the northern town of Mitrovica.

Post Views: 239
Previous Serbia Claims Victory At Islamic Conference
Next US Appeals To Albanians To Apply For New IDs