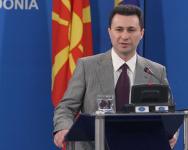 Any compromise between Skopje and Athens on the “name” issue will have to be approved by the people of Macedonia via a referendum, Macedonian Prime Minister Nikola Gruevski reiterated on Sunday.

Gruevski, who is also head of the largest ruling party, the centre-right VMRO DPMNE, made his statement during a ceremony marking the 18th anniversary of the party’s youth union, the local MIA news agency reports.

“Macedonia is doing everything in its power in this regard, in order to find a solution that will not harm the state and national interests,” said Gruevski.

A swift solution on Macedonia’s formal name would pave the way for the country’s speedy accession to NATO and remains the only issue blocking its membership in the alliance.

Last year, Athens blocked Skopje from joining NATO, arguing that the name Macedonia, the same name of Greece’s northern province, implies that Skopje has territorial claims on the Greek region.

The intense UN-brokered solution seeking talks have been in vain. The last offer that the UN mediator in the row, Matthew Nimetz, put on the table was a set of proposed names containing the geographical prefix “Northern Macedonia” to distinguish the country from the Greek province.

The talks are expected to be restarted soon after Greece wraps up its European Parliament elections this month.

Some observers see Gruevski’s insistence on a referendum regarding this issue as a practical blockade of the resolution process, as opinion polls show that the majority of the population would not trade their name for speedy NATO accession.

The opposition parties accuse the prime minister of shirking responsibility and avoiding making a tough decision that could cost him future votes.