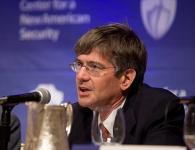 US Deputy Secretary of State James Steinberg on Thursday urged Macedonia and Greece to find a creative solution to their ongoing name dispute.

In an interview with the Macedonian edition of Voice of America, Hillary Clinton’s deputy pledged US help toward finding a resolution to the dispute.

“We shall work hard with both parties to determine their national interests, as both Greece and Macedonia wish for the negotiation process to start moving forward,” Steinberg was quoted as saying.

The new US administration, he said, was hoping to motivate both countries to look beyond the predominant negative sentiment of their citizens and to “consider the wider strategic perspectives and benefits” that would arise from a resolution.

Last year, Athens blocked Skopje’s otherwise certain NATO accession bid, arguing that the country should change its official name, Macedonia, which is also the name of Greece’s northern province. From Athens’ persepctive, Skopje’s use of the name “Macedonia” suggests territorial claims on the Greek province.

Asked whether the US would send a special envoy to the region to speed up resolution efforts, Steinberg did not have an immediate answer.

However, the recent visits of US Vice-President Joseph Biden and Steinberg to the region demonstrate the importance the US attaches to the Western Balkans, he said.

Macedonian President Gjorge Ivanov recently said he expected to revive UN-brokered talks with Greece soon after the elections for the European Parliament in Greece, slated for early June.

The US has so far proven an important catalyst for these talks.