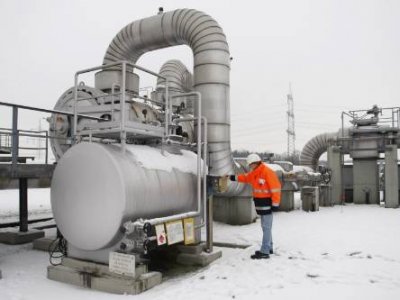 Ukraine has settled its bill for Russian gas supplies in May ahead of a deadline, state energy company Naftogaz said on Friday, after Russia cast doubts on its ability to pay.

Ukraine needed to pay $657 million by Sunday for 2.4 billion cubic metres of gas, including $500 million for gas placed in underground storage.

Russia had warned that gas supplies to Europe could stop within weeks if Ukraine did not pay for gas placed in underground storage that is needed to keep pressure in pipelines to ensure smooth transit.

Moscow cut supplies to Ukraine, and later to Europe, in January during a three-week stand-off over Naftogaz’s debts and the price of gas. Europe gets a quarter of its gas supplies from Russia, most of it via Ukraine.

Ukraine had been vexed by Russian suggestions in recent days that it may not be able to pay for the bill in time, raising the spectre of yet another crisis.

“We expect, after payment is completed, an apology to follow from the Russian side, considering these incorrect and humiliating statements … concerning the ability of Ukraine to pay for gas,” the envoy, Bohdan Sokolovsky, said.

Gazprom declined to comment, but Russian President Dmitry Medvedev said there was no reason for Ukraine to take offence.

“Our Ukrainian partners took offence because Russia suggested they were unable or unwilling to make payment,” Medvedev said at an economic forum in St Petersburg.

“Why should they take offence? Let them pay the money and everything will be all right.”

A central bank official said part of the latest International Monetary Fund tranche split between the central bank and government coffers had been transferred to the state savings bank Oshchadbank, which in turn provided funds to Naftogaz for the gas payment.

Yushchenko, locked in a protracted power struggle with Prime Minister Yulia Tymoshenko, has cast doubt over Naftogaz’s finances. He said the company had $7.4 billion worth of debts, while this year’s revenues were expected to be $7.8 billion.

Tymoshenko and her government, which is responsible for Naftogaz, say the company’s finances are stable.

Ukraine expects to import 7 billion cubic metres of gas in the second quarter, 9.5 bcm in the third quarter and 14 bcm in the final quarter, according to government documents made public on Friday.

According to an agreement with Russia struck in January, after the stand-off, Ukraine pays for gas this year at a 20 percent discount to market prices. This means it expects gas prices to fall sharply towards the end of the year.