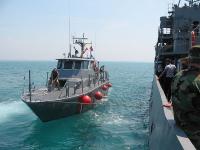 Albania is heading a series of NATO led naval exercises in the Adriatic Sea, a first for the newly promoted member of the alliance.

The war games which include thousands of marines and officers from Albania, Croatia, Slovenia, Greece, Italy and Montenegro, aim to strengthen cooperation between naval forces in the region in an eventual crisis.

The naval exercise, code-named “Adrion Liveks 09”, has been held in recent years in Italy, Greece and Montenegro.

“Our goal is to show that we are up to NATO standards,” Roland Nasto, chief staff of the Albanian naval command, told reporters.

Dozens of coast guard patrol boats and warships are participating in the exercise, among them five from the Albanian naval force.

Albania and Croatia officially joined NATO last week ahead of the Strasbourg summit, where the two new member states participated as full-fledged members of the alliance for the first time.