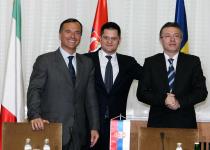 The Italian and Romanian foreign ministers issued a joint statement recommending that the interim agreement between Serbia and the EU be put into effect immediately, calling for the Stabilization and Association Agreement, SAA, to be implemented by the end of June.

The pair also recommended that the EU work on guaranteeing Serbia’s candidature in the club soon.

Frattini told reporters that it was in the region’s best interests to back Serbia’s EU membership.

Diaconescu echoed these sentiments, saying it was integral for Serbia to join the European club as it shared the same energy and enthusiasm for cooperation as the other 27 members states.

Diaconescu also underlined that Serbia’s cooperation in the area of regional security.

“We also discussed matters we disagree on, that is, the issue of Kosovo’s proclamation of independence. We agreed that this issue must not stop us on the road to EU membership,” Jeremic said.