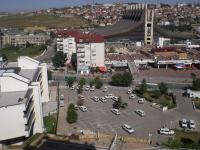 UNMIK is making preparations for at least two more years in Kosovo, despite calls from the Kosovo Government to end its presence in the country.

The timeframe emerged in a tender from the United Nations Mission in Kosovo, which is ordering in two years of fuel, with the option to extend the contract for another three years.

UNMIK’s role in the country, which declared independence 17 months ago, has been largely taken over by the European Union Ruleof- Law Mission, EULEX, and the International Civilian Office, ICO.

But UN Security Council Resolution 1244, which gave the UN its mandate in Kosovo, remains in place and the mission has been criticised for being unready to relinquish its position any time soon.

UNMIK has until now refused to speculate on how long it is planning to remain in Kosovo, but the two-year fuel contract is being seen as a sign that the mission is not preparing an early exit.

The interpretation was rejected by UNMIK spokesman Russell Geekie. He said that the timetable would be decided by the Security Council.

He said: “The mission plans for different scenarios to ensure that we don’t run out of gas.”

The fuel is destined for UN distribution points in Prishtina, Mitrovica and Skopje, as well as “specific sites for approximately 36 UNMIK generators and 23 UNMIK heating units throughout Kosovo”.

Government spokesperson Memli Krasniqi told Balkan Insight that the Government’s stance on UNMIK staying in Kosovo has been very clear since the implementation of Kosovo’s constitution.

“Considering the political developments in Kosovo, UNMIK is not needed in Kosovo,” he said, adding that the Government has sent a request to the Security Council calling for an end to the UNMIK mandate.

According to Ardian Gjini, from Alliance for Kosovo’s Future, AAK, the Government has not invested sufficient effort to ensure UNMIK is made obsolete.

Albin Kurti, leader of the Vetevendosje! Movement, said there was one local and one international aspect to explain the longevity of UNMIK in Kosovo. “Kosovo’s Government is trying to please everybody,” said Kurti.

According to him, the fact that the Government included Resolution 1244 in the declaration of independence is a scandal.

The second aspect, according to Kurti, is that Obama’s foreign policy is fostering a multi-polar world giving more importance to the state’s interests.

While EULEX deployment was initially postponed, there was considerable determination from the EU institutions that UNMIK should be replaced by EULEX.

“The main problem is that EULEX is coming in and UNMIK is not getting out,” said Joost Langedijk, member of the European Parliament and its rapporteur for Kosovo.

As the new civilian mission started to deploy in Kosovo, while the UN was not moving, Kosovo’s senior leaders started to call for UNMIK to end its mandate.

It has, however, significantly reduced its policing numbers. The figure stands at 500 today, down from 5,000 when Kosovo declared its independence.