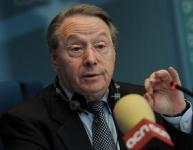 Macedonia should work towards better relationships with its neighbours if it wants to join the EU, says PACE president Luis Maria de Puig.

The president of the Parliamentary Assembly of the Council of Europe (PACE) said that the road to EU membership is long and hard and that “everyone needs to be on your side if you want to progress.”

His words in Skopje on Tuesday referred to an long-running and ongoing dispute with Greece over who gets to use the name “Macedonia”.

He added that willingness to complete EU reforms and improve relations with Greece is not enough and that Macedonia has to place themselves “in the shoes of [their] neighbours to better understand their arguments.”

Resolving the “name” issue is seen as the only stumbling block in Macedonia’s progression towards acceptance into the EU. Greece also blocked Skopje’s NATO aspirations last year.

Greece argues that “Macedonia” is the name of a region in its own northern province. They feel Skopje’s insistence on using that name means they are laying claim over that land.

Bilateral relations have been further stressed after Skopje during the last months decided to name its main highway after Alexander the Great, the ancient warrior king whose origin is also a matter of dispute between the two countries.

Macedonia, an EU candidate country since 2005, is hoping to be greenlighted this autumn by the European Commission for the start of its EU accession talks.

UN-sponsored talks over the naming dispute are due to resume in Geneva later this month.