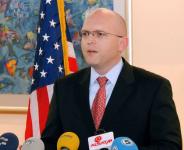 While the ”name” referendum is a legitimate idea, Macedonia’s leaders should focus on making the undisputed high NATO and EU approval in the country a dream come true, the United States ambassador to Macedonia said.

The US ambassador to Macedonia urged its leaders to focus more on entrance into NATO and the EU through a solution on the “name” row with Greece.

“[Macedonia’s] leadership has the responsibility to take up this initiative, consider the people’s wishes and work hard on transforming them into a new reality. We believe this could be the best future for Macedonia,” US ambassador to Macedonia Phillip Reeker stressed in Washington DC.

The statement comes amid lively debate in the Macedonian parliament over the country’s strategy in solving the “name “row with Greece. The debate over which country gets to use the name “Macedonia” is an obstacle to Macedonia’s entry into NATO.

Athens and Skopje are engulfed in a long running row over the formal name of Macedonia. Greece insists that Macedonia’s formal name clashes with that of its own northern province, and implies that Skopje is making territorial claims over it. The row intensified last year after Athens blocked Skopje’s entry into NATO pending a solution.

Macedonia’s VMRO DPMNE party and its allies have been proposing the idea of a referendum should any compromise with Greece be reached.

Macedonia’s main opposition party, the Social democrats, is staunchly against the idea of a referendum. They argue that it would be difficult to persuade people to vote for any compromise because people would vote with their hearts and not their heads.

A parliamentary debate on Monday hit an impasse. VMRO DPMNE reportedly gave up the idea of adding in the referendum in to the country’s strategy but was held back by voices from the Socialist party.

The UN sponsored “name” talks are set to resume later this month in Geneva. America is seen as a major catalyst to the talks.