Paramilitaries Get 15 – 20 Years for Kosovo Crimes 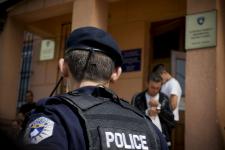 Three Scorpions paramilitaries have been sentenced to serve up to 20 years in prison for killing 14 civillians in Podujevo, near Pristina, in March 1999.

The verdict, handed down yesterday at the Belgrade District Court War Crimes Chamber, sentenced Zeljko Djukic, Dragan Medic, and Dragan Borojevic to 20 years, and Miodrag Solaj was given 15 years.

In the verdict’s explanation, the suspects were identified as members of the Scorpions unit that operated as part of the Serbian Interior Ministry, who on the evening of March 28 1999, opened fire, with intent to kill, on 19 unarmed civilians in the Gashi family garden in Podujevo.

Of the 19 civilians, all were women and children, five of the children survived the attack with serious injuries, yet were able to testify at the trial; Saranda, who was 14 at the time, Fatos, 13, Jehon, 11, nine-year-old Lirie and six-year-old Genc.

Once news reached the Interior Ministry command in Podujevo, they were withdrawn as members of the Scorpions unit from Kosovo.

The trial of the ‘four Scorpions’ began in September of last year.

The trial lasted 33-days, with 29 witnesses testifying, including a witness under witness protection and seven survivors.