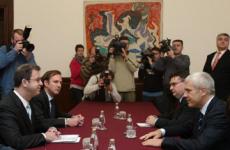 Dutch Foreign Minister Maxime Verhagen is scheduled to visit Serbia in July to discuss trade cooperation between the two countries, but the visit will not change the Netherland’s against Serbia’s Stabilization and Association Agreement, SAA.

A Dutch Foreign Ministry statement said that Verhagen would discuss with his Serbian counterpart Vuk Jeremic further cooperation between the Netherlands and Serbia in economic and other areas.

Earlier this month, the Netherlands softened its stance on eased access to EU visas for Serbians.

However, it is still vetoing a SAA signed by Serbia in April, seen as the first step towards EU membership for western Balkan nations.

In order to gain approval for the SAA, Dutch officials are demanding that Serbia demonstrate full cooperation with the Hague-based International Criminal Tribunal for the former Yugoslavia, ICTY, and arrest and extradite wartime Bosnian Serb military leader and war crimes indictee Ratko Mladic.

Even though Dutch Foreign Ministry said the upcoming visit would not change the country’s SAA stance, Serbian authorities have said they would do everything possible to convince the Netherlands of their committment to ICTY obligations.

Serbian Deputy Prime Minister Bozidar Djelic told local media that Belgrade would present its arguments, “and not only those related to the Hague Tribunal cooperation, but also to the results in the process of EU integration”.

Serbian authorities are hoping for a change in Dutch sentiments ahead of the next EU ministerial meeting scheduled for July 27.