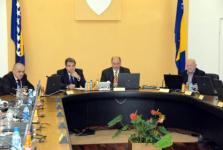 Bosnia and Herzegovina is hopeful that a compromise has been reached with the International Monetary Fund, IMF, which would allow this financial institution to activate a Euro 1.2 billion stand-by arrangement for the country.

“The IMF is finally satisfied,” reads a front page article in the Sarajevo daily Oslobodjenje on Wednesday.

The good news came from the new Premier of the Bosniak (Bosnian Muslim)-Croat federation, Mustafa Mujezinovic, in the middle of the Federation Parliament session on Tuesday.

“I have just been informed that as Bosnia and Herzegovina we have fulfilled conditions for the finalization of the arrangement with the International Monetary Fund,” Mujezinovic told parliament, briefly interrupting their session.

The deal came after Mujezinovic, who was approved as the new Federation Premier only last week, took a much stronger position in regard to Bosniak war veterans and invalids, whose associations have in the past been among the most influential lobbying groups.

Earlier this month, the Federation government tried to renege on a deal reached with the IMF in May, which included serious budget cuts at all administrative levels and reduction of public expenses, including salaries and social benefits. The deal triggered a wave of protests by war veterans and trade unions.

However, the IMF refused to consider the Federation government’s request to change the terms that had already been agreed in a letter of intent from the government clearly indicating that social benefits to war veterans would be cut by 10 percent, and Bosnia’s Stand-by Arrangement appeared to be stuck.

However, Mujezinovic offered a new hope. He proposed a new solution, which would maintain personal benefits, but would involve a speedy revision of all beneficiaries, eliminating those who are claiming benefits illegally.

Mujezinovic openly addressed angry war veterans’ associations on Monday and warned that his government will sue not only those who have obtained illegal social benefits, but also doctors who have issued them.

If Mujezinovic’s sources are correct, the IMF could approve Bosnia’s deal as early as the beginning of July and pay the first tranche soon afterwards.

Many local and international experts have warned that the entire country but especially the Federation, would face difficulties and possibly even a bankruptcy if the IMF were to cancel its loan to Bosnia.