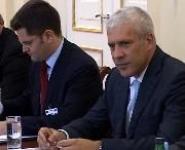 Serbia and Armenia are key states in resolving European energy supply problems and political crises in their regions, Serbian President Boris Tadic said on his return from Yerevan on Wednesday.

Tadic is back in Belgrade after a two-day diplomatic trip to Armenia in which he held talks with President Serzh Sargsyan and Prime Minister Tigran Sargsyan.

“The most important gas pipelines for supplying the European market in future will apparently pass through Serbia and Armenia,” Radio Television Serbia, RTS, quoted Tadic as saying.

According to RTS, the officials agreed that there is considerable potential for improving political and economic cooperation between the two countries, with the agricultural sector holding the most potential with this regard.

Both parties agreed that regional conflicts, such as those in Kosovo and Nagorno-Karabakh, should be resolved without the use of force and through negotiations in accordance with international law.

Tadic also visited the town of Etchmiadzin, which is the spiritual center of Armenia and the seat of the Armenian Apostolic Church, meeting with Supreme Patriarch and Catholicos of All Armenians His Holiness Garegin II.