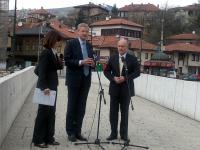 Political leaders have made “little progress” in meeting the conditions required for the final closure of the Office of the High Representative, Bosnia’s top international envoy said.

Because of this situation, the closure of the OHR and establishment the Office of the EU Special Representative remain uncertain, western diplomats told Balkan Insight on Friday. The transition was supposed to take place by year’s end.

In a press statement, the OHR said that High Representative Valentin Inzko, met Swedish Foreign Minster Carl Bildt on Thursday. Inzko told Bildt that “there has been little progress since the last session of the Peace Implementation Council, PIC, in meeting the five conditions and two objectives for OHR transition.” Sweden currently holds the EU’s rotating presidency.

The PIC is comprised of representatives of all key countries engaged in the peace-implementation process in Bosnia and oversees the work of the OHR. At the last PIC meeting in June, the body noted the complete political standstill with regard to the fulfilment of conditions required for the OHR closure. As a result, the PIC postponed a decision on the closure of the Office until its November meeting.

The OHR was supposed to have been closed two years ago but the worsening political crisis and growing security concerns have forced the international community to delay its disestablishment.

However, Sweden and some other EU countries are increasingly lobbying for the OHR’s closure, whether the stated conditions are met or not.

The US, Turkey and some other countries disagree, insisting that the OHR, as the ultimate guarantor of Bosnia’s territorial and constitutional integrity, should not be closed at a time of profound crisis.

The western officials told Balkan Insight that a new round of diplomatic battles between the US, Russia and various EU countries is expected in September, as they seek agreement on appropriate international policy positions towards Bosnia and the wider region.

Referring to the benchmarks for the closure of the OHR, Inzko told Bildt: “Currently, we are not on track to complete the 5+2 agenda by the November PIC meeting. We need a new approach to see progress.”

Inzko also spoke to Bildt of his recent discussions with Bosnian party leaders and the prospects for constitutional reforms, which will be required as part of the EU integration process for Bosnia and Herzegovina.

“By starting a process of constitutional reform in the autumn, political leaders in Bosnia and Herzegovina would send a strong signal that they are ready to assume full responsibility for the country,” Inzko said.

There is skepticism over the capacity of bickering Bosnian leaders to undertake such serious reforms as the 2010 general elections approach.