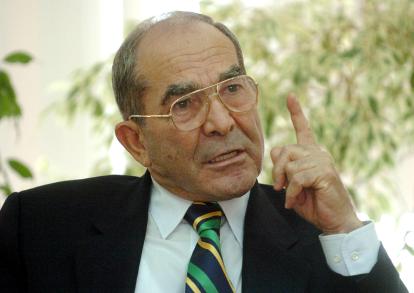 Former Chief of General Staff Gen. Hilmi Özkök ruled out any negotiations with the Kurdistan Workers’ Party, or PKK, in an interview with daily Milliyet published on Monday.

“There cannot be any negotiation with the terror organization. I agree on that. You cannot talk with a person who took a gun and ascended the mountains,” Özkök was quoted as saying.

He said sitting and talking to someone who went against the law and took up arms would be grave, referring to members of the outlawed PKK, which is blacklisted as a terrorist group by Turkey, the United States and the European Union.

“I definitely think that the PKK’s involvement in this initiative will be a serious mistake and it will block progress from the beginning. As I said, this is now what is being done in the political wing,” said Özkök.

The government recently announced a “Kurdish move,” assigning the Interior Ministry with the mission of coordination. Interior Minister Beşir Atalay is holding a series of meetings with members of civil society and political parties for a resolution of the decades-old dispute.

“I do not know what the method might be. Certainly, I do not know what is thought at which stage. The Ministry of Interior is following a method. Nevertheless, there is nothing concrete about what they are going to do. Certainly, it is necessary to carry out this important process cleverly. I hope this began following good preparations,” said Özkök.

Asked about calls to involve the imprisoned PKK leader, Abdullah Öcalan, in the ongoing process, the former commander said Öcalan’s participation would not be correct.

“Now he is the head of the terror organization. It is impossible to accept. I do not know if he will make a contribution by some means or other. Everyone has responsibilities. Even as a citizen I have responsibilities. Official involvement of either the terror organization or its head Öcalan is not right. I think that his official involvement will obstruct the process,” Özkök said.