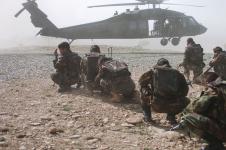 The CEO of Miami-based company AEY, who is suspected of conducting a shady munitions deal with Albanian authorities to ship Chinese-made ammunition to the Afghan army, pleaded guilty Monday to conspiracy in Florida.

The dealer, 24-year-old Efraim E. Diveroli, who is often described as a weapons “genius”, admitted that he had arranged the repackaging of millions of old, Chinese made cartridges for assault rifles, and had then certified that they were made in Albania.

As part of a plea bargain, prosecutors dropped more than 80 other charges of defrauding US federal authorities.

At his sentencing in November, Diveroli is expected to receive up to a five-year prison term.

Two other AEY officials, David Packouz and Alexander Podrizki, pleaded guilty to a single fraud conspiracy charge at the end of May. Ralph Merril, an AEY investor, has rejected the plea bargain

Diveroli, Packouz, Podrizki and Merrill were indicted by a federal grand jury in Miami on wide-ranging fraud charges in connection to the supply of ammunition to the Afghan army in June 2008.

“The defendants submitted documents to the [US] Army falsely attesting that the ammunition they provided was manufactured in Albania, when, in fact, the ammunition came from China,” an attorney for the Southern District of Florida, R. Alexander Acostain, said in a statement at the time of the indictment.

“To effect the scheme, defendants Diveroli, Packouz and Podrizki directed others to assist in the packaging of ammunition to be delivered to Afghanistan and provided instructions to remove Chinese markings from containers to conceal that the ammunition was manufactured in China,” the statement read.

Albanian leaders are suspected of profiting from the murky arms deal with AEY, whose contract with the US Army has been suspended.

The row erupted after the New York Times published an article on March 28, 2008, accusing Albanian officials of shady deals with the Miami-based Pentagon contractor. The company had its contract with the US military revoked after claims by the newspaper it was supplying decades-old ammunition to the Afghan army.

It is alleged Tirana and AEY used a third company, Cyprus-based Evdin Ltd., subcontracted to Albanian trading giant MEICO, to coordinate the deal between the Albanian military and AEY.

The New York Times alleges that the head of MEICO, Ylli Pinari, doubled the real price of the munitions and pocketed the difference, which was shared out among Albanian politicians.

“Such accusations should be used for toilet paper,” Prime Minister Sali Berisha said when questioned on the allegation in parliament.