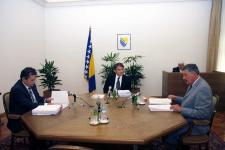 Underlining the severity of Bosnia’s political crisis, local leaders engaged in another virulent tit-for-tat over the weekend, accusing each other of working towards the country’s dissolution and of threatening a new war.

The new low in relations between Bosnia’s political leaders was precipitated by an interview with the Bosnian Serb member of the country’s tripartite presidency, Nebojsa Radmanovic, published by Belgrade daily Vecernje Novosti on Saturday.

“Bosnia and Herzegovina is one step closer to dissolution than it is to joint functioning,” Radmanovic said in the interview.

Radmanovic blamed “a certain number of foreigners, concentrated around the Office of the High Representative [OHR]” for directly contributing to this situation through “supporting differences and crisis”. He added that they “send out message that foreigners support only Bosniaks [Bosnian Muslims], which is a pity for the whole of Bosnia and Herzegovina”.

Although Radmanovic did not give any names, local and international analysts were in no doubt that the accusation was aimed at Deputy High Representative Raffi Gregorian. Bosnian Serb officials have repeatedly accused the US diplomat of political meddling and have even pressed criminal charges against him and several other local and international officials.

In the interview, Radmanovic rebuffed growing pressure from the US and EU for a new round of constitutional changes in Bosnia. He also accused Bosniaks of trying to carve their own national state out of Bosnia.

In a press release issued on the same day, the strongest Bosniak party, the Party of Democratic Action, SDA, said that instead of working towards the better functioning of Bosnian institutions, Radmanovic is calling for their demise.

The SDA also claimed that the leaders of the Serb-dominated Bosnian entity of Republika Srpska, and the strongest Serb party, the Alliance of Independent Social Democrats, SNSD, are blocking the work of key state institutions and crucial reforms. The SDA, which has previously threatened to pull out of the Bosnian state government, called upon the OHR to unblock the work of state bodies.

Vasic added that Radmanovic’s assessment and his warning of a possible dissolution of the state were correct, but that the real situation was “even more difficult”. Vasic also blamed Bosniaks and the OHR for this situation.