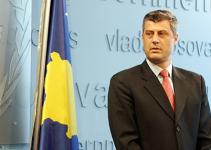 Thaci said the facts presented in the encyclopaedia are typical of a tendency in Macedonia to aggravate interethnic tensions.

“We should not focus (our attention) on the minds of the people who have a mentality from the previous century that is not different from the Serbian,” he said.

He added that all the countries in the region must not discriminate and focus more EU integration.

“We should look to future, we should look towards our European perspective, and all those people who wants to remain in the past, let them remain,” said Thaci.

The encyclopaedia, which describes Albanians as settlers who arrived in western Macedonia in the 16th century, and uses the term “Shiptari” which is considered derogatory, has drawn considerable flak among Macedonia’s Albanian community and NGOs.