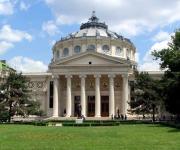 Chisinau’s new liberal-led government has said it wants to improve ties with Romania, after relations between the two countries reached a nadir following demonstrations in April which the then Communist government blamed Bucharest for inciting.

But Romania has previously refused to sign a political treaty with its post-Soviet neighbor, fearing it would amount to a confirmation of the 1939 Molotov-Ribbentrop pact, which gave the Soviet Union Romania’s eastern province of Bessarabia, which covers most of what is now Moldova, Radio Free Europe reports.

Various Romanian governments have instead offered to sign a “declaration of European integration”, an initiative that has so far been rejected by the former Communist led government.

Romania has not commented on the call from the new Moldovan government to sign such a treaty.

Ties between the two countries, which share a common language and history, warmed up instantly after the opposition’s win in the elections. Moldova abolished visa requirements for Romanians traveling to their country, while Romania said it will lobby for close ties for Moldova with the EU.