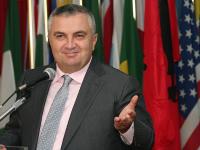 “EULEX will help bring European standards to Kosovo’s institutions, especially [in moving] towards a government based on the rule of law” Meta said during a meeting with ethnic Albanian Kosovo politician Behgjet Pacolli on Thursday.

“We praise as very important the functioning of EULEX in terms of Kosovo’s constitution and the application of the Ahtisaari plan,” he added.

Following its deployment in December 2008, EU’s nation-building effort in Kosovo, which replaced a UN mission, had a pretty uneventful start.

Launched a few months after Kosovo’s unilateral declaration of independence on February 17, 2008, and a follow-up agreement negotiated by UN General Secretary Ban Ki-moon, EULEX is charged with mentoring, monitoring and advising Kosovo’s rule of law institutions.

EULEX has 2,000 staff on the ground in Kosovo, which also hosts around 14,000 international troops. The mission has had a difficult relationship with Kosovo’s Serbian minority in the northern town of Mitrovica, which has seen sporadic violence.

However, the EU decision to sign a protocol with Serbia’s Interior Ministry on the exchange of information on cross-border serious crime, despite the opposition of Kosovo’s government and protests from civil society, has seen the mission’s reputation plunge with the ethnic Albanian majority.

For the government of Kosovo, whose independence has now been recognised by 62 states, including most major EU states and the US, the protocol was an infringement of its sovereignty.

Mutes after the protocol was signed on September 11, Kosovo’s President Fatmir Sejdiu and Prime Minister Hashim Thaci issued a joint-declaration, distancing themselves from the pact.

“The Republic of Kosovo is not a party in technical arrangements between EULEX and the Interior Ministry of the Republic of Serbia for cooperation in the field of police,” the statement read, adding that “such arrangements do not and cannot have any impact on the independence, sovereignty and territorial integrity of Kosovo.”

Kosovo’s government strongly objected to the policing protocol, on the grounds that it is up to Kosovo’s own institutions to sign international agreements. The pact is also part of the technical requirements demanded of Belgrade for Serbia to join the EU’s visa-free zone. Kosovo remains the only western Balkan state excluded from the visa scheme.

Some 22 Kosovo civil society organisations, and hundreds of their supporters, headed by the charismatic leader of the nationalist youth movement Vetvendosje (“self-determination”) Albin Kurti, protested on September 14 against EULEX and the protocol.

Standing on top of a loudspeaker, mounted on an old green truck, parked next to the wall of the EULEX compound in central Pristina, Kurti panned the EU mission for what he called its discriminatory policies toward Kosovo and its people.

“EULEX does not see us [as the] victims of the crises that we are in, but as possible culprits in case these crises explode,” Kurti told protesters. “They don’t see our country as a place where people have needs and rights, but as a massive crowd that must be disciplined,” Kurti claimed.

A few days earlier, Vetevendosje overturned 25 EULEX vehicles in a parking lot in the centre of the city, in response to EULEX’s plan to sign the protocol. Twenty-one activists were arrested by police and remain in custody.

Reacting to the Kosovo government statement, EULEX Spokesperson Christophe Lamfalussy tried to downplay the discontent over the protocol.

“The arrangements on police cooperation with Belgrade are of a technical nature; they are aimed at fighting organised crime and smuggling and this will be to the benefit to all the people in Kosovo,” he said.

“It is important to underline that EULEX is here to support Kosovo in the rule of law area and would never take any steps that would harm Kosovo,” he added

Belgrade had rejected Pristina’s involvement in the agreement, as it staunchly maintains that its independence declaration was illegal and still considers Kosovo a southern province of Serbia.

According to Marko Prelec, Balkans Project Coordinator with the International Crisis Group, EULEX made a mistake in signing the protocol without securing Pristina’s support at the outset, and in not conducting the negotiations with Serbia in a transparent way.

Prelec argues that the Kosovo government also erred in not insisting on being involved and instead choosing to stand aside and make a political issue out of the agreement.

“The substance of the protocol – regulating cooperation between EULEX and Serbia – was agreeable to the Kosovo government, and could have been managed in a less formal way, without raising [independence] status issues,” he said. “Belgrade, in turn, would not have objected to Pristina’s involvement, as long as it was kept low key,” Prelec added.

Besa Shahini a senior analyst with the European Stability Initiative, agrees, underlining that Kosovo’s government knew full well that the protocol with Serbia would eventually be signed and saying it is inexplicable that they did not insist on being respected as a legitimate government, with the sole right to sign international agreements on behalf of Kosovo.

“Not that the insistence would have changed anything regarding the protocol, however, it would have given the EU and EULEX an indication on the boundaries to which it can interpret its mandate as executive, and sign agreements on behalf of Kosovo,” said Shahini.

In the coming months, EULEX is also expected to finalise two further protocols with Belgrade. Many analysts fear that, if these agreements are handled in the same manner as the police protocol, tensions in Kosovo could escalate even further.

“Tensions should gradually fall, but this depends in large part on whether EULEX concludes the remaining two protocols – on customs and on the judiciary – in a completely transparent way,” said Prelec. “Bypassing Kosovo institutions on these two protocols would be a devastating mistake,” he added.