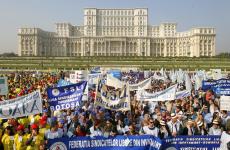 Around 700,000 public servants launched a strike on Monday in protest at the government’s decision to cut salaries and jobs in the public sector.

Unionists are threatening to call a general strike for an unlimited period if their demands are not met.

The unions are reacting to the passage last month of three key pieces of legislation, including a legal emendation to regulations governing public sector wages. The laws mandate pay cuts and the imposition of ten days of unpaid leave.

Romania is trying hard to reduce public spending, in an effort to speed IMF-prescribed reforms, linked to the receipt of a 20 billion euros aid package.